Apple - Holes In the Ceiling Single 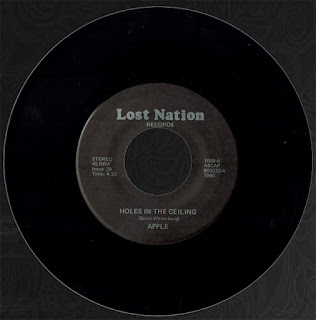 Here's a Powerepop 2 sider for ya that's a bit on the moody side. The band is pretty much a mystery, (at least as far as the internet and myself are concerned..lol). Other then a few Ebay listings and Discogs; there's no mention of them anywhere. The white paper sleeve, is autographed by Scott Wittenburg. I found an Author/ Photographer from Ohio, with some bands in his past but I'm not sure if it's the same guy. Discogs has it, released in 1979; so I guess we'll spin with that? Going Back is my favorite, of the two.Lost Nation Records 1979

1. Holes In the Ceiling
2. Going Back
♫♫►►Now It's Started To Rain◄◄♫♫
Posted by Frank Miller

Hi Frank, thanks for sharing this real gem!!
Cheers!

Hi Vlad. You're welcome; thanks for commenting! Stay tuned. I intend on expanding on this post, in the near future.