TOT ROCKET AND THE TWINS 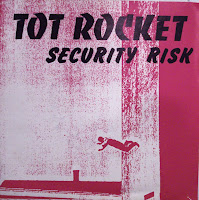 Tot Rocket was formed in 1979 when Ron Spitzer, Andrew Halbreich and Robert Poss, who had played in various blues / rock bands together in high school, ended up moving to East Haven, Connecticut to form a new band. An early musical eclecticism caused by the three's disparate musical tastes (ranging from Chicago blues to glam to country rock) was soon galvanized by the burgeoning New Haven punk scene and by seeing live shows by The Clash, The Undertones, The Jam, Iggy Pop, The Neighborhoods, Johnny Thunders and Graham Parker and the Rumour. Tot Rocket and the Twins was a name coined by Robert Poss; he still doesn't know why, but it sounded right at the time, unfortunately. Their first drummer was Patti Coppola; she was followed by Lou Farace, who played on their first single, "Reduced / Fun Fades Fast," released by the infamous Whiplash Records (home of the Corpsegrinders). The band lived briefly in Jamaica, Queens and then moved into New York's East Village in 1980. Michael Goglia joined as the new drummer and played on their EVICTION EP, released on Trace Elements Records. John Bulcken, who replaced him in 1981, played on the band's SECURITY RISK EP, also released on Trace Elements. (This was in the days before digital recording, before music videos, before CDs, before the internet and MP3s, when vinyl still ruled the world.) Tot Rocket played at places like CBGB, Max's Kansas City, The Playroom, The Rat, Ron's Place, A7, and a host of other small clubs and underground spaces whose names are lost to history. THIS INFO AND MORE CAN BE FOUND AT THERE MYSPACE http://profile.myspace.com/index.cfm?fuseaction=user.viewprofile&friendID=191740720
.
1. ONE MORE EVICTION
2. HUNDRED YEARS WAR
3. TWENTY FOUR HOUR PROTECTION
4. TIME TO WASTE
.
TRACE ELEMENTS RECORDS 1981
.
***DOWNLOAD***
Posted by Frank Miller