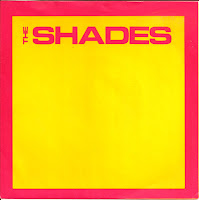 For the hell of it; I took a look in my old Volumes book to see what it had to say about this record. It claimed this band was from Vancouver, and, appeared on The Vancouver Complication Comp.I guess you can't believe everything you read. I think the Shades were from NJ, but I'm not 100% sure, they played mostly around The Trenton, and Philadelphia area. This may have been their only record but once again, I'm not certain. If you know anything please feel free to fill in the blanks. I found this link that should clear things up a bit, CHECK IT OUT !
.
Go Go Inc. 1979
.
1. Hello MR. Johnson
2. Are You My Angel ?
.
***DOWNLOAD***
Posted by Frank Miller 9 comments:

The ZIpz (As I Pass You By Single) 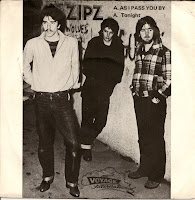 This ones a total mystery to me. While researching the band I found this was posted a few years back over at the excellent Short Sharp Kick In The Teeth Blog. Hopefully, someone will see this and give some information on this great record. The back of the sleeve claims these songs are taken from a forthcoming album Titled "Quick As A Flash" Does anyone have this?? Was it ever Released??
.
Voyage International Records 1980
.
1. As I Pass You By
2. Tonight
.
***DOWNLOAD***

Hollywood Brats (Then He Kissed Me Single) 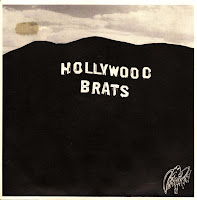 The Hollywood brats formed in London in 1971. Originally a three piece, they called themselves The Queen. Band members were: Andrew Matheson, (Vocals) Casino Steel, (keyboards) and drummer Lou Sparks. After a conflict of band name, with the Freddie Mercury led rock band, they decided to change their name to The Hollywood Brats.
In 1972, Eunan Brady, (Guitar) and Wayne Manor, (Bass) were added, and the lineup was complete. Championed by Keith Moon, the band landed a deal with NEMS Records and recorded an album, but the label pulled back, refusing to publish the material. Ultimately this setback along with various mounting frustrations, led to the bands end in 1974. Mercury Records released the LP in 1975 entitling it Grown Up Wrong and crediting the band as "Andrew Matheson & The Brats" to avoid contractual problems with NEMS, however, the album was released only in Scandinavia. A few years later, Cherry Red Records released,(this single) their cover of The Crystals "Then He Kissed Me" in 1979, as well as re-releasing the LP in 1980.Following the demise of the Brats,Matheson went on to record with Tools and Wreckless Eric's Last Orders. Steel spent time in London SS, and eventually ended up in The Boys..
.
Cherry Red Records 1979
.
1. Then He Kissed Me
2. Sick On You
.
***DOWNLOAD***
Posted by Frank Miller 5 comments: 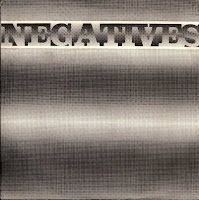 The Negatives were from Sheffield England. They were around from the late 70's through the early 80's. I think this was their only single. They made it onto the comps: New Wave From The Heart, and Bouquet Of Steel. Band members were: Pete Eason, (Vocals) Fraser "Snapper" Charles, (Guitar, Piano) Brad Martini, (Bass, Vocals) and Steve Wilmot (Drums, Vocals).
.
Aardvark Records 1980
.
1. Electric Waltz
2. Money Talk
.
***DOWNLOAD***
Posted by Frank Miller 5 comments:

The Joysticks (What More Can I Do SIngle) 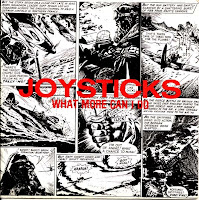 I'm pretty sure The Joysticks were from Australia. Members: Steve Agar, (Guitar) and Bill Leggett, (Vocals) may have previously been in a early 80's Melbourne band, The Shindiggers, I couldn't find anything on Mike Cronin, (Bass) or Grant Cleland (Drums) anyone ??
.
Rampant Releases 1987
.
1. What More Can I Do
2. Without My Say
.
***DOWNLOAD***
Posted by Frank Miller 7 comments:

The Boyz (Laughs On Me Single) 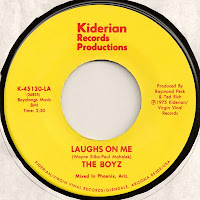 A few months back I posted a Single by Chicago's , The Huns , which was actually the final sessions from this band; under a different name. If you liked that, I'm sure you'll enjoy this as well. What we have here is another great slab of 60's inspired pop. I'm pretty sure this never had a picture sleeve; If you'd like to read more about The Boyz, check them out HERE , enjoy !!
.
Kiderian Records 1975
.
1. Laughs On Me
2. Charlotte
.
***DOWNLOAD***
Posted by Frank Miller 1 comment:

The Hi-Fi's (I Don't Know Why You Love Me SIngle) 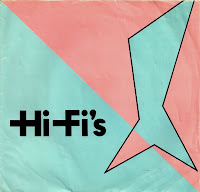 Here's one for you, it's one of my favorite Canadian Powerpop records. The Hi-fi's were from Toronto, they were formed around 1977 or 78, by Greg Keelor, and Jim Cuddy, who had met while in high school. Other band members were: Jim Sublett, ( Drums) and Malcolm Schell (Bass, and Vocals). Unfortunately, I couldn't find much in the way of info on those guys. I believe this was their only single. They were approached by Ready Records with a deal; but for what ever reason, it never materialised. Eventually The Hi-fi's disbanded, and Keelor, and Cuddy went on to form the groups: Fly to France, and the one their most known for, Blue Rodeo.
.
Show Time Records 1980
.
1. I Don't Know Why (You Love Me)
2. Look What You've Done
.
***DOWNLOAD***
Posted by Frank Miller No comments: 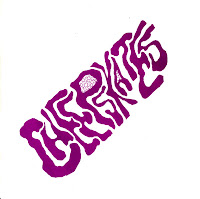 I've been wanting to post something from The Cheepskates, for quite sometime, they're one of my favorite 80's Garage revival bands. Their brand of 60's inspired pop is truly haunting. It took me a while, because I couldn't decide what I wanted to post. Anyway, I decided to pull a few of my favorite songs from each of the 3 studio Lp's I own, as well as a live LP from 1988.I used their first single for the cover. In All, it has 17 tracks, it's kind of a big download, but if your not real familiar with these guys I'm sure you'll find it worth the wait. I think my favorite , of the three full length is "It Wings Above". I like them all, but over the years I've found myself listening to that one the most. I realised I'm missing an LP titled Remember, as well as a couple of later releases, oh well, it gives me something else to look for. I actually got to see The Cheepskates live in NYC once, The Mosquito's were on the bill as well, I came away thoroughly impressed, it was a great show. The Cheepskates were from NYC, They were around from the early 80's, through the early 90's ( although they've gotten back together for a few special occasions). They made more than half a dozen albums for American and German labels. After They called it quits, singer Shane Faubert released a few more solo records. I found THIS site, where you can pick up most of their releases on CD.
.
Midnight Records 1984
Midnight Records 1986
Music Maniac Records 1988
Music Maniac Records 1989
.
***DOWNLOAD***
Posted by Frank Miller 6 comments: 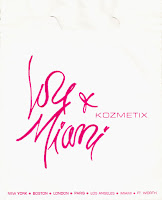 Lou Miami And The Kozmetix were a Boston four piece, who were around from 1978 till the mid eighties. During that time they released one single, two EP's and a couple of comp tracks. The core of the group was: Lou Miami, (Vocals) and Jack Rootoo ( Guitar). Drums, and Bass were somewhat of a revolving door, but at least on this record; it was: Tom Martel, (Bass) and Mike Ross (Drums). As you can see, the sleeve of this single is a white plastic cosmetics bag that was meant to mimic a Lord & Taylor shopping bag. (I love creative packaging) Both sides of this record are winners in my opinion. Fascist lover smokes, and the flip is a great cover of the Lulu hit, To Sir With Love. Although I read it's rumored an LP may exist, I don't believe one was ever officially released. I'd like to also note, the flamboyant front man Lou Miami eventually became involved with practicing witchcraft in Salem. After the bands end, in The mid Eighties; Lou Miami moved to LA, and in 1995; passed away from heart failure. Jack Rootoo, formed a band called Girl On Top, and in 2008, died of esophageal cancer. I found THIS PAGE you should definitely check out, it's a great read.
.
Final Vinyl Records 1982
.
1. Fascist Lover
2. To Sir With Love
.
***DOWNLOAD***
Posted by Frank Miller 7 comments:

The Stilettos (This Is The Way Single) 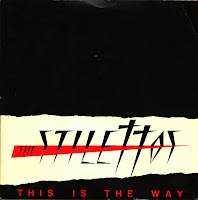 Just wanted to thank the reader Bassman UK, for this updated information. The Stilettos were a four piece from the Cleveland area, UK. They were around from, 1978 to 1980, and this was their only single.