Ever since hearing this Ep, I haven't been able to get it out of my head. Super catchy tunes with absolutely Killer female vocals.
Karkki & The Car Keys are a four piece from Helsinki, Finland. This new limited edition Ep, (300 copies) just came out in March on LSD Records. They also have a split cassette with Mystery Girl, from Albany, New York.

Grab one while you can...

The Form ( Watch Out Ep) 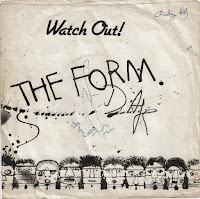 This one was posted a while back on a couple of great blogs but I really wanted to add it to my collection, so here it goes.
The Form were a London five piece, that came together in the late 70's and lasted till 1981. This, (the bands only record )was recorded in 1979, the better part of a year before it was released. 547 copies were pressed; 47 without sleeves. My copy is autographed by the band. I was doing some reading on the Bored Teenagers Website . It appears that live, two ladies named Caz and Pet, calling themselves the Nymphets would join, creating a six vocalist assault. 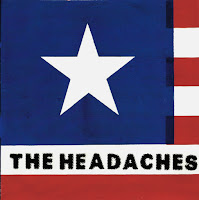 a re-post, originally posted 2-26-2011, new rips and scans, enjoy!
The Headaches were a Chicago Four piece, that formed in 1979. This was their only single, 500 of these were pressed, three hundred came with silk screened picture sleeves. Sometime around 1982, due to many of the usual reasons, the Headaches called it a day. They reformed in the 90's and released an LP titled, "Cavities From Candyland".

♫♫♫Straight Through The Night...♫♫♫
Posted by Frank Miller No comments: 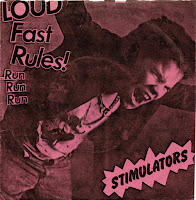 a re-post, originally posted 11-16-2008, new rips and scans, enjoy!
The Stimulators, founded by guitarist Denise Mercedes were a NYC four piece that were around from 1978 to 1982. During that span, they released one single, a live cassette and a promo 3 song ep, that I read was never commercially sold to the public. Honestly, I can't say if that's true. The song M.A.C.H.I.N.E. ended up on the New York Trash Comp reissue in 98.
Although having a small sample size from a release standpoint, The Stimulators are generally considered one of the last great NYC punk bands, before the era of Hardcore ushered in. Drummer Harley Flanagan, (Denise's Nephew) went on to form The Cro-mags; he was 11 while playing with The Stimulators. Patrick Mack died in 1983 of complications associated with AIDS. 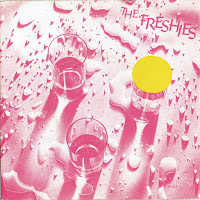 a re-post, originally posted 9-6-2008, new rips and scans, enjoy!
Time for a few re-post's. As I said when I first posted this record almost 12 years ago...(can't believe it's been that long) Yellow spot used to drive us crazy. My uncle had it on an old mixed tape from a friend that he lost contact with. The song remained a mystery for almost 20 years before I finally solved it, taking a chance on an ebay listing. I can't tell you how many people I played it for, who I considered knowledgeable and continually came up empty. Much of this time was before any of us had the internet. I used to think it was probably something pretty rare; turned out, it wasn't. Still a great record though, lol..
The Freshies were a four piece from Manchester, England that formed in the mid 1970's and continued till 1982. Founded and led by Chris Sievey, the band went through numerous line-up's. Although having a considerable amount of releases and material, I don't believe The Freshies released a full length. This and the majority of the bands releases were on Chris Sievey's own Razz Records label.
After The Freshies split, Sievey went on to a solo career alongside his comedic alter ego, Frank Sidebottom. Sadly, at the age of 54, he passed away of Cancer in 2010. 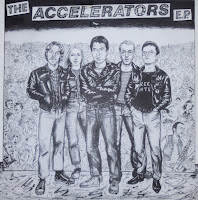 a repost by request, originally posted 3-13-2009, new rip enjoy!
Liverpool's The Accelerators Formed in 1977, playing over 400 gigs in their five-year existence . Other than this record they had a great track on the Liverpool comp Street to Street called Radio Blues. They also released a cassette through mail order in 1979 called, Have you been accelerated? It would seem that in 1981 the Accelerators became no more. Here's a Link and as requested by Graeme, a Live video for Popguns and Green Lantern.

1. Popguns and Green Lantern
2. Liberate the Night
3. Broken Promises
4. Reason For Treason
5. Telepathic Romance
6. This is Your Life