The Tapes (Love And Lust Single) 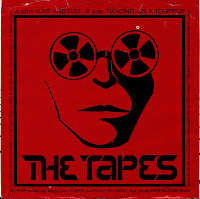 The Tapes are a NYC four piece that formed in 1981 and I think are still at it to present date. This was the bands first single; another single followed in 1984 with the tunes "Too Many Stars", and "Just Like In The Movies". After the murder of a band member and some other shake ups, the band reformed in 1986 as Bill Popp and the Tapes. I think this side of the sleeve is actually the back; but I prefer it out of the two sides so I figured I would use it. The tapes have a number of full lengths to their credit as well. If you would like to read more about the band you can check out their Myspace, or Bill Popp.Com.

Yorks (Figure And A Face Single) 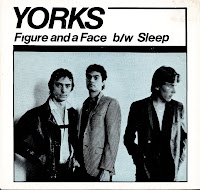 The Yorks were a three piece from NY. I'm not sure if they were upstate, or from the city. I think this was their only record but I'm not sure. I couldn't find too much about them on the net. If you know anything, please feel free to fill in the blanks...
The Band-
James Colbert - Lead Vocals, Guitar
Bob Wire - Drums, Vocals
Kevin Joy - Bass, Vocals
Little Hero Records 1980
1. Figure And A Face
2. Sleep
♫♫♫...The Yorks...♫♫♫﻿
Posted by Frank Miller 6 comments: 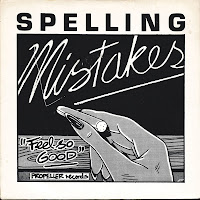 (Per request, new rips and scans)  The Spelling Mistakes were a New Zealand four piece that formed in 1979 out of  the remnants of the bands, Get Smart and The Aliens, their Initial bassist, Keith Bacon, was replaced early in 1980 by Nigel Russell.
Their first recording was Reena, which featured on one side of a single (with The Whizz Kids) on Ripper Records in early 1980. After winning a band talent quest, organised by their manager, they signed to Simon Grigg's Propeller Records label, and released this single, in June, 1980. It peaked at #29. A second single was recorded but remained unreleased for two decades as the band split in September 1980 after finding it increasingly difficult to find bookings because of the nature of their under-age following.
They reformed briefly in 1999 but parted ways for good later that year. In 2004 Feels So Good was re-recorded and featured on an Export Gold advert.
A complete, semi-official, collection of available recordings was released in 2002 as a 2-disc set under the name The Spelling Mistakes: Epileptic Apocalypse 1979 - 1999. It was nominated for 'best rock release' by bNet NZ Music Awards in 2003. If you want to read more about the band here's their Wikipedia Page.

The Earwigs (She's So Naive Single) 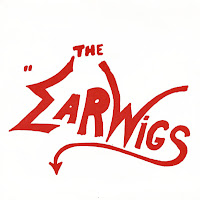 I hope everyone had a nice holiday, and I'd like to wish you all a Happy New Year! I apologise for not being around lately, responding to your comments, or filling your requests. Honestly I'm not sure if my hearts in this anymore. I thought some time away might help me get a little fire back. Anyway, please accept this little gem as a token of my appreciation for you continued support.
The Earwigs were a four piece from Orange County California  formed by Michael Ubaldini in 1978. Unfortunately this single was their only release. It was mastered, and pressed at Gold Star Studios; home of Phil Spectors wall of sound. I read there was an album recorded that never saw the light of day (man I would love to hear it!!). The Earwigs called it quits in 1984 for many of the usual reasons. If you would like to read more about the band, you check out their Myspace.