The Demons (Action By Example Single) 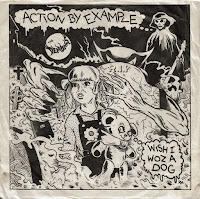 a re-post by request, new link, rip and pics, originally posted 3-27-10.
The Demons were a London based band, originally called Demon Preacher, who formed sometime around 1975. They released two singles; The Royal Northern E.P. on Illegal Records and Little Miss Perfect, on Small Wonder Records, both from 1978. The band endured numerous line up changes. For a brief time they shortened their name to the Demons, and released this single on their own Crypt Music label. After this, they changed their name back to Demon Preacher and broke up. The line up for this record was: Nik-E-Wade (vocals), Jim Bryson (guitar), Dave Shark (guitar), Stevie Vincent (bass), and Kim Barti (drums). Nick Wade went on to form Alien Sex Fiend, and the flip side of this single ended up on their first LP.

The Crows (Don't Play Around Single) 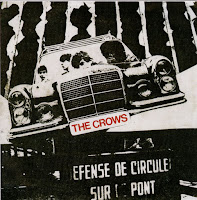 a re-post by request, new link, originally posted 8-29-11.
I just picked this record up recently; and I've been listening to it quite a bit.The Crows were a four piece out of Belgium. I can't find any info on the these guys; and unfortunately the record yields little. "Don't Play Around", pretty much instantly stuck in my head. Oh well, I'd like to know more about The Crows; if anyone would like to share some info.

THE CRIMSON SHADOWS (OUT OF OUR MINDS) 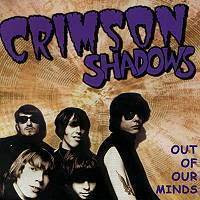 a re-post by request, new link, originally posted 11-01-08.
The Crimson Shadows were a great primitive sounding garage band from Sweden. They started sometime around 1984 . Most of their records are fairly pricey these days. I think this is their complete studio recordings.

A Taste Of The Prisoners 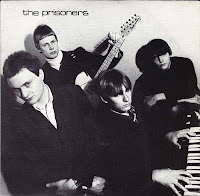 a re-post by request, new download links, originally posted 11-19-12.
Since I've had numerous requests for Prisoners re post's, I'm doing away with my three earlier post's and combine them into one. Basically, I recorded a bunch of my favorite tracks from various releases, all ripped from good old vinyl, except a couple from "In From The Cold", and a bonus track from the CD version of A Taste Of Pink". My copy of "A Taste Of Pink" is on pink vinyl, and although it looks mint, it has a little snap crackle to it; oh well, it adds to the charm. I added a couple of tunes from the awesome Prime Movers Lp as well. It's a large file so I had to break it into two parts, I also added the cover scans to the downloads as well, "Enjoy"
The Prisoners were a three piece from the Medway region of southern England that formed in 1980.They took the name from fellow Medway band the Vapours first single 'Prisoners'. The original line up consisted of 16 years old's, Graham Day (guitar, vocals), Allan Crockford (bass) and Johnny Symons (drums). Bruce Brand from the Milkshakes was with the group briefly as a second Guitarist, but it wasn't until 1982 when James Taylor (Organ) was added to the line up when they officially became a four piece. In all The Prisoners released at least four full lengths, four singles, and contributed numerous compilation tracks before calling it a day sometime around 1986. Besides the Prime Movers a few other post Prisoners related bands include: Planet, The Solarflares, Graham Day and the Gaolers, Gift Horses, Thee Mighty Caesars, The Buff Medways, Galileo 7, The Stabilisers and The James Taylor Quartet.If you would like to read more about the band's here's a few links to get you started.