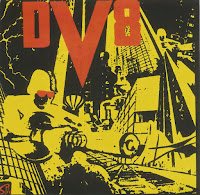 DV8 were a short lived Chicago three piece that were around in the early Eighties. Far as I know this was their only record. After DV8 parted, Eric Spicer moved on to play drums for Naked Raygun.

1. Learn To Say Goodbye
2. Guns On The Right 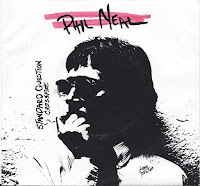 Phil Neal is a Kansas City, Missouri Performer/Songwriter. His resume dates back to the late 70's as front man for bands such as: The Artists, The Phil Neal Band, The Power Ties, The Rockhills and more recently, Phil Neal and the Wornalls. Seems at one time, he was on the verge of commercial success, having opened for the likes of Kenny Loggins and having videos aired on MTV. His current band, The Wornalls released two full lengths. If your curious, you can check them out Here.
Cross Fire Line Up -
Phil Neal - Lead Vocals, Rhythm Guitar
Doug Gunn - Drums
Guido - Lead Guitar, Vocals
Richard Streeter - Bass Vocals
Standard Question Line Up -
Phil Neal - Lead Vocals, Guitar
Henry Earley - Lead Guitar, Vocals
Doug Gunn - Drums
Richard Streeter - Bass, Vocals
Raoul Stitt Percussion, Vocals
Brian Holman - Synth
Clafin on cover, Claflin on record label ? Music 1980
1. Standard Question
2. Crossfire
♫♫♫...Tell You What To Do...♫♫♫
Posted by Frank Miller 2 comments: 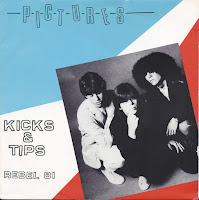 Pictures were a Swedish three piece that released three singles in the early Eighties. This was the second of three and my personal favorite. Before Pictures, Lasse Hansson and Patrik Sventelius were in Hangover who released a couple of singles around 78-79 and were responsible for the classic buzzsaw, "Sick Society".. 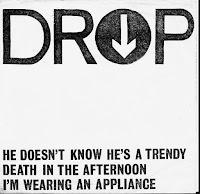 Drop was a four piece from Middlesbrough England that formed in 1978. I'm guessing this was they're only record and it appears to have been self released. They reformed a couple of years back and started performing and writing new material. I FOUND a COUPLE of PAGES you can check out. The first one has some recent live footage. 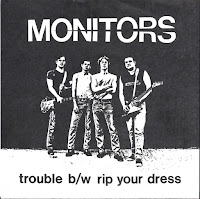 A repost by request, originally posted 11/25/11, new rip and scans, Enjoy.
The Monitors, were a four piece from Cleveland; that formed in 1980. This single was their only official release. In 1982 they relocated to San Francisco, and disbanded. If you would like to read more about The Monitors, here’s a page interviewing front man Nelson Yandura.