Where The Hell Is Leicester (Various Artists) 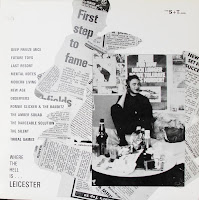 (updated 7/17/10) Thanks to the amount of bandwidth I now have I decided to upload the rest of this record, Enjoy. Here's another compilation, this time its bands from Leicester, England. Earlier I posted both of the singles from The Amber Squad, here's another track from them as well as a great track from Last Resort.
.
S + T Records 1981
.
***DOWNLOAD***
Posted by Frank Miller 6 comments: 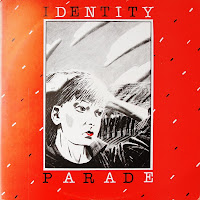 Staying within the Powerpop Vein, The Direct Hits, Back To The Sixties is a monster, and another one of my favorites. It resides here on this compilation which showcases some bands from the Manchester scene around 1980. There's a note on the back cover from Pete Baker, (a DJ from Manchester's, Piccadilly Radio), who proclaims Punk Is Dead... Viva La Revolution ! I would have included the whole record but, I'm afraid I'm going to have to buy more band width soon so I just picked my favorites.
.
TJM Records 1980
.
***DOWNLOAD***
Posted by Frank Miller 2 comments: 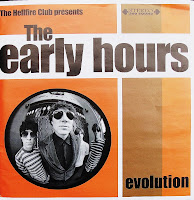 The Early Hours were from Perth Australia, they formed the group around 1995 when brothers Kirk and Chet Pohl hooked up with their school friends Matt Davis and Sean Carthew. They started the group, to record 60’s influenced pop. Initially, they never intended to perform live, but changed their minds in order to promote their music. Their first lp was recorded before ever playing a gig together, I found that pretty interesting. As far as I can tell, In all they recorded 2 full lengths, 1 single, and a best of disc. I found no info to lead me to believe they were out past the late 90's. I found an interview with the band HERE , and a biography page HERE . My copy of Evolution is a special edition, on the French Hellfire Club Records label. It consists of two 7 inches on red and yellow vinyl.
.
Hellfire Club Records 1997
.
***DOWNLOAD***
Posted by Frank Miller 3 comments:

The Reruns (Since You Gotta Cheat Single) 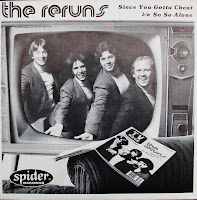 I posted this 9/24/2008 and The song So So Alone wasn't even in the download file. I just noticed it, nice to see your all paying attention. Anyway here's a re post of it. This is an awesome record with buzzsaw guitars. Both tracks are catchy as hell. This info is from a cool website called Nestor In Detroit , it covers the Detroit scene. Go check it out. The Reruns were part of the original wave of bands that spearheaded that influential early Detroit “punk scene” in the late 1970s. The true story of this exciting era in music is yet to be written, but places like Lili’s & Paycheck’s in Hamtramck, Bookie’s & the Red Carpet in Detroit were soon hopping to the sounds of a whole new generation of bands, whose influence extended far beyond those tiny little clubs. The Reruns were an important part of this early scene and more importantly, their music is just “too damn” good to be forgotten.The Reruns were a band from Hamtramck and they never let anybody forget that. Their overriding characteristic was a sense of humor that managed to permeate everything they ever did. An short interview in White Noise from 1979 managed to cover the all of the following topics: the closing of the Dodge Main plant in Hamtramck, a stabbing at a recent show, movie host Bill Kennedy and the goofy last names that the Reruns use to protect their real identity. The Reruns musical legacy was fairly brief: a couple of singles that are now virtually impossible to find and one song that was included on the “Detroit on a Platter” compilation, which is slightly less than impossible to find. In keeping with the Reruns tradition, “So So Alone” managed to get included on a couple of compilations without anybody realizing it.The Reruns music was pigeonholed as being “power pop” and it got lost in the shuffle with all of the punk music being put out during that time. However, a listen to the Reruns today goes a long way toward dispelling that misconception. The Reruns sound just as vital today as they did back at Lili’s.Actually, the Reruns just didn’t vanish off the face of the earth after 1981. After the Reruns broke up, Dave, Al and Kenny their aliases and formed the Polish Muslims, whose brand of humor and music has been entertaining fans to this very day.
.
1. SINCE YOU GOTTA CHEAT
2. SO SO ALONE
.
SPIDER RECORDS 1978
.
***DOWNLOAD***
Posted by Frank Miller 4 comments: 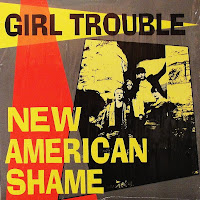 Girl Trouble Formed in Tacoma Washington in 1983. Band members are; Kurt P Kendall (vocals and Saxophone), Bon Von Wheelie (drums), Kahuna (guitar), and Dale Phillips (bass).They made their vinyl debut in 1987 on Olympia, WA's K Records, in all they put out five LP's , at least eight singles, one EP, four splits with other bands, and countless comp tracks. I saw them live once, and I don't know if they were off that night or what but, they really didn't impress me that much. I love this record though, it's by far my favorite from them. Girl Trouble appears to be still going strong, They list up and coming shows on their MYSPACE.
Here's Girl Trouble official web page go check it out.
.
EMPTY RECORDS 1993
.
***DOWNLOAD***
Posted by Frank Miller 3 comments: 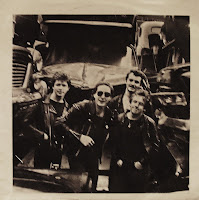 London's Speedometors Formed in 1976. They released two singles, this one (on Mascot Records) was the first. A second single titled Tonight Tonight, and A full length titled Day In The Lights were both released on the Acrobat label. Their line up was; Martin Finlay(guitar, vocals), Toose Taylor(guitar, vocals), Robbie Watson(bass, vocals), and Lol Gellor(drums) who later left the band ,and was replaced by Steve Parry who came from The Radio Stars.
By the end of 1979 the band went in different directions to pursue other avenues.
.
References - Speedometors MYSPACE
.
Mascot Records 1977
.
1. Disgrace
2. Work
.
***DOWNLOAD***
Posted by Frank Miller 3 comments: 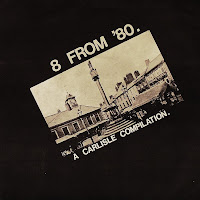 Matchbox Classics was a independent label that released mainly singles by bands from, or near Carlisle, Cumbria, England, UK. I tried looking these bands up separately and found little info on any of them. All the tracks are pretty good on here but for me, the standouts are The Spivs, MR. Bulder, No Support, and The Limps. As always, your welcome to add to this.
.
Matchbox Classics 1980
.
1. The Spivs - Maybe It's Different
2. The Pedestrians - Walk It
3. Mr. Bulder - She Knows
4. No Support - Prophetic Justice
5. Veldt - Bleak
6. The Toolbox Murderers - Alco
7. Kirsty And The Husbands - Sitting In A Disco
8. The Limps - So Nice
.
***DOWNLOAD***
Posted by Frank Miller 6 comments: 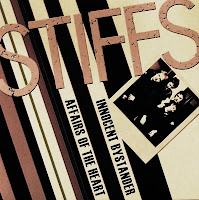 The Stiffs formed in Blackburn, Lancashire in 1977, they were 15 year old kids. The band featured: Phil Hendriks (Lead vocal, Guitar); Ian “Strang” Barnes (Guitar, Backing vocals); John McVittie (Bass, Backing vocals); Tommy O`Kane (Drums).Their first single ‘Standard English’ was released in early 1979. In all The Stiffs released 5 singles, the first two, and the last on their own Dork Records, one on EMI / Zonophone, and one on STIFF records . They called it a day in 1988, leaving behind quite a bit of unissued material. These two tracks are part of that legacy. In my opinion, Affairs Of The Heart, is the best song that I've heard from the Stiffs. Pity it wasn't released until fairly recently. If your interested, you can purchase this record from Dork records HERE or, Still Unbeatable records HERE .
.
References - The Stiffs HOME PAGE / DORK records / Stiffs MYSPACE
.
STILL UNBEATABLE RECORDS 2008
.
1. Innocent Bystander
2. Affairs Of The Heart
.
***DOWNLOAD***
Posted by Frank Miller 1 comment: