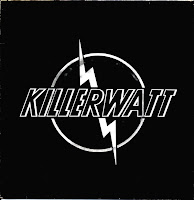 Killerwatt were from the San Francisco area, I think this may have been their only single. It was produced by Tubes founder, Bill Spooner, On Our way back home is Powerpop, while Main Idol has a harder edge to it. After Killerwatt, Scotland born lead vocalist Ken Cameron, played around LA in various bands, and eventually became the house sound engineer at Madame Wongs in Chinatown until it burned down, he now owns a Guitar and Ukuleles store in Hilo, Hawaii . Bass Player Terry Nails would later go on to bands such as: The Steve Jones Band, Ozzy Osbourne, Bone Angels, and Hard Luck. Keyboard player, Jesse Bradman went on to play with: Eddie Money, Aldo Nova, Keel, and Night Ranger. Drummer, Paul Zahl, went on to The Yanks, and The Flamin' Groovies. I couldn't find anything on Guitarist George Falbo, Here's Ken Camerons MYSPACE PAGE, it has some info, as well as a link to his store. As usual any additional info or corrections are welcome.
.
Brainchild Records 1977
.
1. On Our Way Back Home
2. Main Idol
.
***DOWNLOAD*** 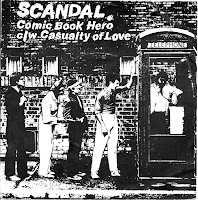 Here's a great little record, from a band I know nothing about. It was the second release from Local Records, an independent label based in Tottenham, who mainly released Reggae, and, Dance records. I can only assume the band was from that area as well.
.
Local Records 1979
.
1. Comic Book Hero
2. Casualty Of Love
.
***DOWNLOAD***

The Essentials (Fast Music In A SLow Town E.P.) 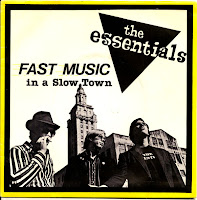 Sorry I haven't posted much lately, I've been trying to keep my New Years resolution and get myself in better shape.Years ago when I had a radio show, I used to like playing Turn off your radio. Not only was it funny to play, but it's a great song as well. I wanted to try to put together a bio on the Essentials, but as always info is scarce. I borrowed most of my information from THIS article. I shortened it up quite a bit, so if you would like to read more go check it out. The Essentials were from South Florida. Influenced by the likes of: The Beatles, The Who, Credence Clearwater Revival, and The Jam, Walter Cz (guitar) placed an ad in a magazine, that was answered by; Phil Stingray,(guitar) and Lois Lane,(Bass). Early on John Galway played drums while gigging. In 1980, after catching an Essentials show, Pete Moss saw them perform, impressed, he persuaded Walter to let him join the band. By 1981, Phil left to start his own band, and The Essentials became a three piece. Lois eventually left as well to pursue a managerial position with McDonald's. Steve (Sincere) Anthony took over on bass for awhile, but was never committed to the band. He did however play on this record which was put out by Herald critic, and unofficial Essentials manager Bill Ashton, who basically started Safety Net records with the purpose of putting out a record for The Essentials, he used his own tax refund to do it. Towards the end of 1982 Henry Sarria took over on bass, and The Essentials moved to LA, I'm not sure what happened to them after that. Walter designed the cover for this single as well as covers for bands such as: the Wrap, the Eat, Charlie Pickett and the Eggs , and a compilation titled The Land That Time Forgot. Pete Moss passed away on May 20th, 1997. That's all I Have, If you have anything to add or correct please feel free.
.
Safety Net Records 1982
.
1. Turn Off Your Radio
2. I Don't Get
3. Johnny
4. It's Essential
.
***DOWNLOAD***
Posted by Frank Miller No comments:

The Seen (When I Was Young Single) 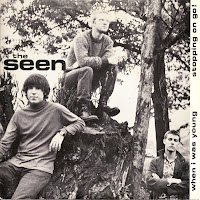 The Seen were a three piece Mod/Garage outfit from Pennsylvania, around from 1981 till 1988. Their recorded output was an LP Titled Under The Sun/In The Rain, This single, a self-released 3-song cassette EP, a track on The Declaration of Fuzz comp, and a great more garage sounding tune called Jealous Girl, on The Battle of the Garages 2 comp which I included it for your listening pleasure. I found THIS PAGE For a great authentic sounding 60's revival band from the late 90's called The Berkeley Squires, that included; Glenn Sadin. I'm not sure if their still around or not. I did however find this Myspace page as well as this Facebook page for The Seen that mentions a new LP, so maybe The Seen are back.
.
Paradox Records 1986
.
1. When I Was Young
2. Stopping On Go !
3. Jealous Girl
.
***DOWNLOAD***
Posted by Frank Miller 16 comments:

The Nosebleeds (Ain't Bin To No Music School Single) 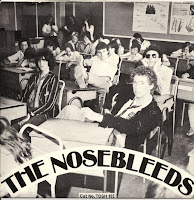 Here's one I think most of you should know. This is one of the first punk records I ever bought when I was a kid. I really played the hell out of it, and blew out a speaker or two in the process. The Nosebleeds formed in 1976 in Wythenshawe, Manchester, England. This was the only record they put out, it sold 10,000 copies. Here's a Wikipedia page with a more in depth history of the band, as well as some great links.
.
Rabid Records 1977
.
1 Ain't Been To No Music School
2. Fascist Pigs
.
***DOWNLOAD*** 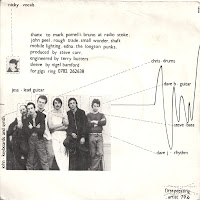 I hope everyone had a great holiday, thanks for all the comments and well wishes. Here's the second effort from the Penkhull based outfit known as The Veins. While researching the band, I stumbled upon Their first single. You can check it out at the great Punk Business Manager site, along with lots of info, especially in the comments. Although I agree with Tony, this record shows signs that it may suck, I think it's a solid release. Side one's a upbeat pubrock type stomper, while side two has sort of a later Dammed feel to it. I found THIS Page, as well as a MYSPACE page for your reading pleasure. The Myspace page says there's a third single which I'm gonna assume was unreleased.
.
Redball Records 1979
.
1. Complete Control Rock n Roll
2. Champagne
.
***DOWNLOAD***