THE REACTION (MAKE UP YOUR MIND SINGLE) 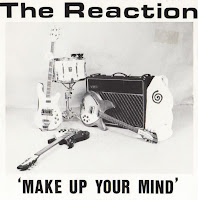 The Reaction formed in Bristol around 1985. Their recorded musical out put consisted of a rare demo, a fan club cassette, a couple of comp tracks, and this single. It received a positive response in the national music press in the shape of the NME, Melody Maker and Record Mirror etc, and the Radio 1 airplay by Andy Kershaw and (the late) John Peel .The single sold out its initial pressing almost immediately. By around 1988 for most of the usual reasons, they called it a day. Sean Thomas, the lead guitarists and singer for the Reaction went on to play in the Garage bands The Mystreated, and the Before And After. Go check out his Myspace.
.
REFERENCES - MYSPACE http://www.myspace.com/seanthomasbyseanthomas
.
WATERLOO SUNSET RECORDS 1987
.
1. MAKE UP YOUR MIND
2. FOUR BY FOUR
.
***DOWNLOAD***
Posted by Frank Miller 3 comments: 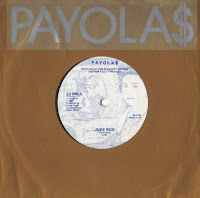 This is an excellent two sider from Vancouvers, The Payolas, This is their second single. I think my favorite song by them was on the lp "In a place like this" Off the top of my head I cant remember the song title but I remember the beginning lyrics went, Johnny's in a factory making war machines. Now I'm going to have to dig that record out. Maybe I'll post it sometime. The Payolas (or Payola$) were part of Vancouver's new wave of bands and active in the Canadian music scene for a decade from the late 1970s. In 2007, they became active again, releasing an EP of new material (Langford Part One) and touring.
The band's name is a reference to the payola scandal in the United States in the early 1960s. The group was based in Vancouver, British Columbia, and recorded mostly at Vancouver's Little Mountain Sound Studios. Through several lineup changes and name changes (the band also played as The Payola$, Paul Hyde and the Payolas and Rock and Hyde), the Payolas core members remained Paul Hyde and Bob Rock, who together wrote virtually all of the band's songs. As well, Rock engineered and mixed virtually every Payolas recording.
Although in the 1980s the Payolas always seemed poised for a big international breakthrough, the band never quite broke out despite their artistic growth and popular success in Canada. They were, however, one of the most prominent and successful platinum-selling Canadian bands of the early 1980s.
.
REFERENCES - WIKIPEDIA http://en.wikipedia.org/wiki/Payolas OFFICIAL SITE http://www.thepayolas.com/
.
FAULTY PRODUCTS 1980
.
1. JUKE BOX
2. TNT
.
***DOWNLOAD***
Posted by Frank Miller 2 comments: 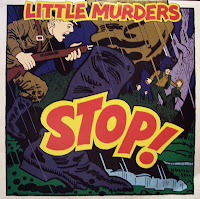 It's a rainy depressing day where I live. To cheer things up a little I figured I would post some Powerpop. If you never heard of these guy's this should be a good introduction. Stop is a compilation of singles ect. I think it's a good representation of how excellent the Little Murders were. Formed in 1979, Rob Griffiths named his band LITTLE MURDERS after a 1971 film directed by Alan Arkin and starring Elliot Gould. As an English expatriate, Griffiths embraced 1960s English pop culture (The Who-The Troggs-The Kinks-Union Jacks drapped over amplifiers) and accordingly LITTLE MURDERS became the premier mod band on the late 1970s/early 1980s Melbourne independant scene. The band's debut single, 'Things will be different'/ 'Take me I'm yours', on Au-go-go Records (December '79) was actually recorded by Rob's old band FICTION, prior to the formation of the first LITTLE MURDERS line-up listed above(see discography). 'Things will be different' was an excellent debut single, a blast of punchy, danceable pop, and it rapidly sold out its pressing of 1000 copies. 'Things will be different' ranks alongside The Riptides' 'Sunset Strip' and Young Modern's 'She's got the money' as one of the classics of Australian new wave power pop. By May 1980, the band's line-up comprised Griffiths, Flegg, Stuart Beatty(guitar) and Steve Fusezi(bass). Two furthers singles for Au-go-go followed: 'High school/Trouble with love' (which featured Clint Small) and 'She lets me know/It's over'. During the sessions that produced 'She lets..', Griffiths took time off to record a single with other musicians. 'Melody/Waiting' came out under the name Dance Set in 1981. Line-up changes plagued LITTLE MURDERS for the next couple of years. The mid-1981line-up featured Griffiths, Beatty, Kim Holmberg(guitar-vocals; ex-Leftovers), Paul Holmberg(drums; ex-Leftovers) and Alan Brooker(bass). The 1982 line-up, wich comprised Griffiths, Rod Hatward(guitar), Chris Hunter(bass; ex-Cuban Heels) and Michael Barclay(drums), was the most accomplished and consistent to date. Unable to secure a major record deal for his efforts, however, Griffiths eventually broke up LITTLE MURDERS in December 1983. Griffiths made an unsuccessful attempt to revive the LITTLE MURDERS name in 1985, and independant label Polyester Records issued the '100 drugs/The beat goes on' single(the tracls had been recorded in 1983 and 1979 respectively). Au-go-go issued the retrospective set Stop! in 1986, which drew together various singles tracks and unissued studio cuts. In late 1995, Rob Griffiths revived the LITTLE MURDERS name, and over the next 18 months recorded a new album. Backing musicains inclued Rod Hayward, Phil Wales(guitar), Craig Pilkington(guitar; ex-Killjoys), and Dave Foley(drums). The album ''...and stuff like that' (june1997) comprised the new material(including the single '100 drugs') plus six previously released cuts. By that stage, Griffiths had a new LITTLE MURDERS line-up on the road with Tony Robertson (bass), plus Paul Thomas(guitar) and Michael Barclay(drums). LITTLE MURDERS issued a new cd-single '100,000 guitars' in September 1998. It was lifted from the band's second CD for the SWERVE label 'First Light'. The album featured the line-up pf Griffiths, Thomas, Barclay, Pilkington and Kate Stalker(vocals) playing pure guitar pop. The second CD single from the album 'Andy Warhol retrospective' followed in June 1999 Little Murders released their fourth album in 2001 called 'We should be home by now", which garnered the best reviews of their career. Since that time Little Murders have played sporadically around Melbourne and Rob has played a number of solo gigs in Melbourne and Sydney.
.
REFERENCES - MYSPACE http://www.myspace.com/littlemurders
.
AU-GO-GO. RECORDS 1986
.
***DOWNLOAD***
Posted by Frank Miller 4 comments: