Just figured I would check in, I'm taking a little break; should be back soon. Please *Note* I deleted my Yahoo Email Address, I got tired of all the spam. My new address is to the right. In case I'm not back till after the holidays, I wanted to wish everyone a happy, and safe holiday season!
Frank
Posted by Frank Miller 1 comment: 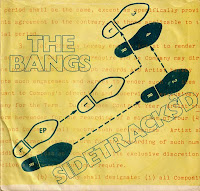 The Bangs were a six piece, from Union City, NJ who I presume formed sometime around 1978. They became fairly popular, opening for acts like Pat Benatar, The Pretenders, The Stray Cats, and Iggy Pop. The Bangs sound ranged from 50’s, and 60’s Rock N Roll, and R&B, to Powerpop. Their records were released on their own East West Record Label, which was also the name of a novelty store based in Union City, owned by their manager Alex Suvino; singer, Gary Roupenian worked in the store. I read somewhere, the Bangs had threatened to sue the (then LA Bangs), forcing them to change their name to the Bangles; but I’m not sure if that’s true. The Bangs released three EP’s before they disbanded, although it appears they re-united a few years ago.Much of the info for this post, came from The Bangs Myspace, go check it out.