The Windows (Don't Hang Up Single) 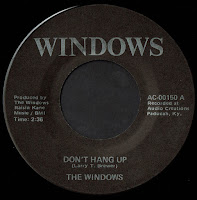 The Windows were a Tennessee four piece that formed in 1980. They released this single and a full length titled "Runnin' Alone" in 1987. Despite opening for the likes of: Peter Frampton, Hall and Oates and Jefferson Starship; The Windows never broke through nationally and eventually called it quits in the mid 90's. If you would like to read more about the band, I found THIS website you can check out.