The Hits (Count On You Single) 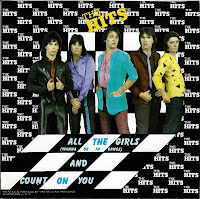 The Hits were a five piece from NYC that were around from the late 70's, into the early Eighties. Unfortunately, I couldn't find much info on the band. This may have been their only single; it was produced by Steve Priest of Sweet; and had a pressing of 1000, (500 pink, 500 black). That's all I could find, Here's A Myspace Page; that has a couple of videos. One on The Uncle Floyd Show, and the other doing a cool tune called Survivor on The Flo, and Eddie Show; anyone know if they ever recorded it? 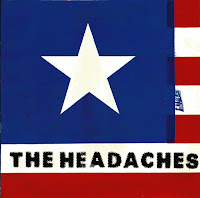 Per Request, Re-posted with New Rips, And Scans, Originally Posted 2/26/11.
The Headaches were a Chicago Four piece, that formed in 1979.  This was their only single, 500 of these were pressed, three hundred came with silk screened picture sleeves. Sometime around 1982, due to many of the usual reasons, the Headaches called it a day. They reformed in the 90's and released an LP titled, "Cavities From Candyland" which you can still pick up from The band for $10.00. Here's A Site where you can find it, as well as a history on the band. Eddy Ulm, also spends his time in a band called The Desperate Club, you can Check Them Out Here! 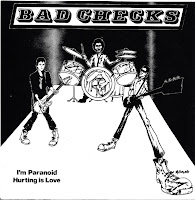 The Bad Checks were a three piece from Durham, NC. Brothers Robin, and Clif Man, along with their high school friend Larry Tally; formed the band in 1980.They released this, their first single in 1982 on their own Loretta Records Label. Around 1984 frontman Hunter Landen was added to the Lineup. Over a span of 20 years, and multiple Drummers The Bad Checks released a number of records, and may still be at it, although I'm not sure. I found This Band Page, if you want to check these guys out further. 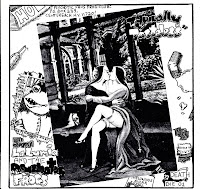 Repost from 9/2/2008, new Rip, and Scans.
I just realized Shotgun Solution turned Four a couple of weeks ago. So I figured what better record to repost than the one that started it all. Jimmy LaLumia And The Psychotic Frogs were from Long Island. They formed as a joke in 1977 to express a hatred for Disco, and were mainstays at Max's Kansas City. They released three singles before going their separate ways in the early Eighties. If you would like to know more about the band Check This Site Out. I decided to make this the first post for my blog because along with the Ramones, this is one of the records that drew me to Punk in the first place. 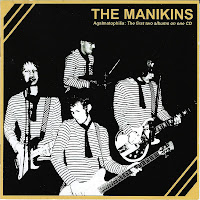 Per request, a re-post from 11/16/08.
This is a killer disk!! It has the Manikins first two albums, which I think are their best. They have a kind of Hives feel to them, while falling on the trashier garage side of things . It all started back in 2001 when four guys got together on a punkrockshow in Nyköping. It turned out that everyone enjoyed the same kind of music and were in love with trashy garagepunk. After a couple of weeks the band started to rehearse and they turned out to play a harder and faster kind of punkrock. Pretty soon they entered Omega Studio in Nyköping and recorded a couple of songs that would end up on the split 7? with Local oafs (another Nyköping act). After a couple of gigs the band almost quit playing for various reasons and all was silent until they decided to start playing the music that once brought them together. They once again entered the studio to record a eight song demo that they sent out to various labels across the globe. The first one who swallowed the bight was the newly started label P.Trash in Germany who got release a 7″ EP called “Don’t Gimme A Choice”. After this release it was Italian label Rockin Bones who got the opportunity to release the bands first album. As the band went on tour they first recorded 12 new songs for their second album called “Epileptic” who was released on P.Trash the 17th of June 2004. “Epileptic” became an instant hit that led to some local gigs in Sweden and some touring around Europe. If you want to know more about the Manikins, Here's their Myspace.

Four/Four (All Wound Up Single) 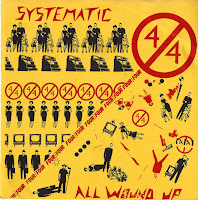 Per request, another re-post from 11/26/09, with new rip, and scans. Here's some great New York organ driven PopPunk from 1980. Once again there's not much info out there on this. The kbd music blog posted this a couple of years back. I really like this record, so I figure it belongs here.If you want to know more check out his post the bass player left a comment with some band info.
Line Up-

♪♫♪♫♪ All Wound Up ♪♫♪♫♪
Posted by Frank Miller No comments:

Critical Mass (It's What's Inside That Counts Lp) 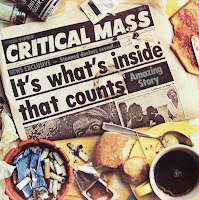 ﻿Per request another re-post from 7/29/09 New Rip.
I'm guessing most kbd, punk type's probably don't like this record compared to the Silver Screen Single,(which in my opinion sounds allot like the Sex Pistols). While I agree this Lp sounds different than the single; if your willing to give it a chance, I think it's a memorable record. Musically it reminds me of a cross between Cheap Trick, and the Carpettes. Critical Mass were a Miami Florida four piece that formed around 1974. As far as releases go, (to my knowledge) they had one single, and this full length. The single was released in 1978 (mentioned above) of which 200 copies were pressed, and has been recently reissued. After numerous lineup changes, (Mick Fazz being the only constant) the band Signed to MCA records and released this Lp; it was recorded at Chris Squires (YES) studio in London England. For some reason, a year or so later, the band ends, Mick moves to Orlando, and resurrects Critical Mass with a new line up. Surviving more line up changes, the band remained there till their end in 1993. I found evidence of a reunion 1n 1997, and a song from as recently as 2007; so for all I know these guys may still be at it in some form? Here's a myspace page I found. 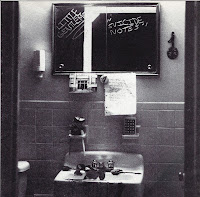 Little Gentlemen were a Philadelphia based four piece. Their output included this, their debut e.p, and a couple of Lp's (one of which I have) that really didn't do much for me . I believe they may have had a couple tracks on the comp Get Of My Back. 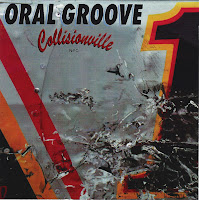 By request, here's a re-post from 11/26/08
This disc spent quite some time in my truck's disc player when I first got it . "Collisionville" is full of catchy pop tunes with great vocals, and harmonies . Oral Groove were a four piece from NYC that were around in the 90's. In all they recorded 2 LP's, this being the second. Their first Lp was titled "June" I've never heard it because I could never find it; but if it's anything like this I'm sure it's worth hunting down.  They had an Ep as well titled "You'll Get Yours Yet" which I've also never heard. Christopher Peck, and Joe Mannix splintered off to form Mannix which now seems to be a solo project. You can check out Mannix Here 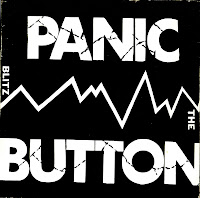 Per request, here's another re-post from 8/3/2010, new rips, and scans.
The Blitz were a five piece, from Berkeley California, unfortunately this was their only single. If you missed this one the first time around, or if you just never heard it before, your in for a treat, (it's top notch Powerpop, all the way!!). I'd like to thank Todd Stadtman for commenting on the original post. He was kind enough to answer a couple of questions. Joe Satriani is thanked on the back of the sleeve, he was Todd's guitar teacher at the time and had helped with the arrangements of the tunes.Gary Phillips, later of the Greg Kihn band, also acted as a sort of shadow producer on the record, working alongside the credited producer, David Seabury. Drummer Ralph Granich was also the original drummer for the 70's Berkeley Powerpop outfit, The Rubinoos. During the 80s Todd spent time in a couple of bands, such as The B Team and The Naked Into, both of which released records; he has a couple of solo releases as well, you can check out Here.