TED LEO AND THE PHARMACISTS (THE TYRANNY OF DISTANCE) 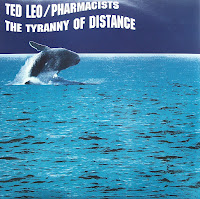 This is one record that I never get sick of listening to. It still sounds just as fresh as the first time that I listened to it years ago. Its a brilliant blend of 70's style rock and pop with Irish overtones. My Friend John said he thought they reminded him some what of Thin Lizzy. At times I can definitely hear that comparison. I'm pretty sure that at least Ted Leo is from Bloomfield, New Jersey.
Ted Leo and the Pharmacists formed in 1999 in Washington, D.C. and currently recording for Touch and Go Records. They have released five full-length studio albums and have toured internationally. Though the group's lineup has fluctuated throughout their career, singer/guitarist Ted Leo has remained the band's main songwriter, creative force, and only constant member. In 2001 the band signed to Lookout! Records. For the album The Tyranny of Distance Leo and Canty utilized a number of in-studio backing musicians. The album incorporated multiple styles including Celtic rock, acoustic folk balladry, and pop rock. During the supporting tours for The Tyranny of Distance bassist Dave Lerner, drummer Chris Wilson, and keyboardist Dorien Garry became permanent members of the band. In 2006 Ted Leo and the Pharmacists left Lookout! Records amidst financial crises within the label, and signed a new contract with Chicago-based Touch and Go Records. It appears that the band is still around in some form playing live from time to time. Their last record came out in 2007 on Touch And Go Records. There are links below where you can go pick up most of their records.
.
REFERENCES -WIKIPEDIA http://en.wikipedia.org/wiki/Ted_Leo_and_the_Pharmacists TED LEO .COM http://www.tedleo.com/news.php MYSPACE http://www.myspace.com/tedleo LOOKOUT RECORDS http://lookout.littletype.com/ted-leo-pharmacists-lkb-grpcat.php TOUCH AND GO / QUARTERSTICK RECORDS http://www.tgrec.com/bands/band.php?id=92
.
LOOKOUT RECORDS 2001
.
***DOWNLOAD***
Posted by Frank Miller 3 comments: