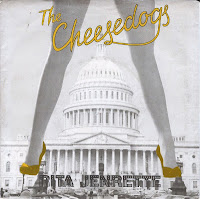 The Cheesedogs were a four piece from Clark, New Jersey. Unfortunately that's all I could find on them. Musically, this record has a cool DIY, Synth, Powerpop vibe to it. The title track is about Rita Jenrette, former wife of U.S. Representative John Jenrette who was convicted for taking a bribe during the Abscam investigation in 1980. She is most famous for an interview she gave Playboy Magazine that appeared in the April 1981 issue, accompanied by a nude pictorial. She claimed that she and her husband had made love on the steps of the U.S. Capitol during a break in an all-night House session. I also found this Cheesedogs Facebook Page which doesn't tell much.

The Times (Radio One Single) 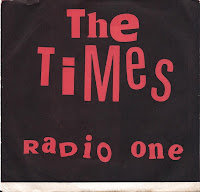 Here's a great single from a little known three piece from Nashville, Tennessee. Unfortunately, I found very little info on these guys. I did find some live footage of the band at some place called The Exit In, from 1983. This One, will get you started; there's five or six others. As per usual, info is always appreciated.

Too Much Saturn (Moving Forward Sideways) 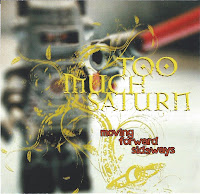 Sorry for the extended absence again. Between work and a couple of family issues I've been having lately, I'm left with little time for much else.
A while back I was contacted by a nice fellow that told me he was a fan of the blog and asked me to re-post a record for him. Turns out that fellow is Dave Franco, drummer for Too Much Saturn. Dave contacted me again recently to inform me the band's released an LP and asked if I would be interested in reviewing it. At first I was reluctant since I try to focus mainly on older records. But being that Dave is a nice guy and a fan of the blog, here it goes...
Too Much Saturn are a Five Piece, that's been around for about five years. The band formed from the ashes of several based bands such as, Great Big Noise, Double Play, Scheme, The Quick, Trendoids, Oh Boy! and The Vandalays. Their name comes from the Francis Dunnery tune Too Much Saturn. Russ Spice, (Guitar) was the technical engineer on The Smashing Pumpkins Billboard Number One LP "Mellon Collie and the Infinite Sadness."
Musically, "Moving Forward Sideways" is modern sounding Powerpop with a slight Indie edge. As I listened to the album I found them somewhat reminiscent of a 90's band, Oral Groove. Overall it's a nice effort; you can tell these guys really enjoy great Pop music and it shows through on the disc. If I had to pick, I think my favorite track here is "Funny". I included it below for you to download.
If your interested in learning more about Too Much Saturn, here's their Bandcamp Page, their Reverbnation Page and their Facebook Page. If you want to buy the disc, here's a couple of places you can find it. Kool Kat Musik, Amazon, ITunes, and CD Baby.