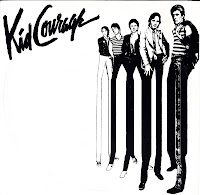 Kid Courage were from San Francisco. I couldn't find much about the band, but I'm guessing they started in the late Seventies, and lasted for a few years. For my taste, this A side of this record isn't anything spectacular; but the flip "I'm A Fanatic" makes it worth the price of admission. They had an earlier single titled "Coast to Coast" that's also worth hunting down. 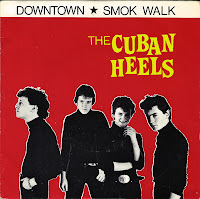 Here's another re-post  from 1/16/10; includes new rips, and scans.
If fast PopPunk covers, and sizzling Hi hats are your thing, then check this record out. This one smokes!!!
After Glasgow punk band Johnny & the Self Abusers broke up, half the band formed The Simple Minds. The other half formed The Cuban Heels. Within four months of the break, the Heels released this gem. For their next outing they set up their own label, Cuba Libre, to release the Walk on Water single in 1980. Paul Armour left, and was replaced by Nick Clarke in time for the 1981 singles Sweet Charity and My Colours Fly; the LP Work Our Way to Heaven was also out by the end of the year, as well as a single in support of it. 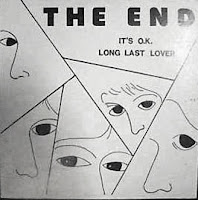 Here's a cool Powerpop record from another obscure band I know very little about. The only reference of this band I could find was a Popsike listing from 2009. The seller claims The End were from N.Y; I'll guess we'll have to take his word for it, since my copy of this record is sleeveless. I borrowed this image from the listing so you could see what the sleeve looks like. If anyone has any info on The End, or you could send me quality scans of the sleeve, it would be much appreciated.

***The End***
Posted by Frank Miller No comments: 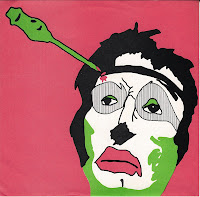 Here's another re-post that, (in my opinion) it's quite essential. It was originally posted here 3/30/09. I've added new rips, and scans.
The Jetsons were from Bloomington Indiana. They formed some time around 1980. Some of the members had come from the Latex Novelties, one of the first punk bands from Indianapolis. I believe this was their only single. They also had a track on the comp, Red Snerts. I read a story from the insert of break the rules #8 that said, soon after the release of this single internal conflicts caused the band to split up. 1500 copies of this were pressed but none were officially distributed. Apparently some one who helped in the making of the record, stole most of the copies and fled to N.Y.C. some time after the break up, the singer Jaime Sever went to Worcester and started the Unattached.

The Puppets (No Strings Single) 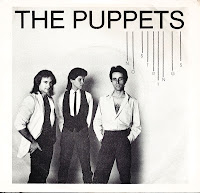 I'm guessing this one's pretty rare, because I barely found a sniff about the band, or the record on the web; pity cause it's a great slab of Powerpop. It seems as though The Puppets were from Washington, D.C, and this was probably their only record; but I'm not sure. The only reference I could find was at the :30 Under DC Site; which has the band being active from 1977 to 1978, with multiple line-ups. Strange thing is, both line-ups are five pieces; with the bands end listed as 1978. This record is from 1980, and the band is a three piece??? If anyone has any info to share it would be much appreciated.

***The Puppets***
Posted by Frank Miller No comments: 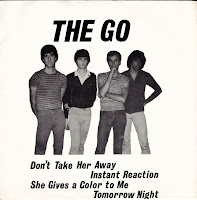 This is a re-post from 11/26/08, (new rips, and scans). It's one of my favorite records on this blog so it was a must to bring back, enjoy!!!
The Go were a great four piece from the NYC suburb of Yonkers; that formed in the summer of 1979. This self released Ep, of which there were 1000 pressed was they're only release. After the EP's release, The Go gained more local notoriety, but no recording contract. By 1982, opportunities began to wind down, and drummer Joe Brya left the band; the Go came to a halt. They reunited a couple of years back to play the International Pop Overthrow Festival, at Kenny's Castaway's.  If you would like to read more on the band, I found This Band Site ,and This Myspace Page . The Go released a couple of retrospects as well, one can be purchased: Here, and the other on Rave Up Records, appears to be sold out. There's also a couple of cool videos on Youtube that are worth hunting down.

1. Don't Take Her Away
2. She Gives A Color To Me
3. Instant Reaction
4. Tomorrow Night

Jimmy Vigtone (I Like It / When The Radio's On Single) 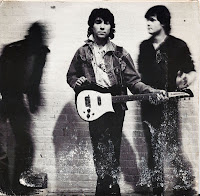 By request here's a re-post from 9/21/11, with new rips, and scans.
Boston's Jimmy Vigtone released this, their only single in 1982. It's the result of songs recorded while Jimmy was working in a recording studio. There was a band to back the record called the Vigtones that were around for a short time; but parted ways due to musical differences. After the Vigtones, Jimmy went on to The Clicks. Unfortunately, My copy's sleeve has seen better days, but at least you get to hear it.

The Revelons - The Way (You Touch My Hand Single) 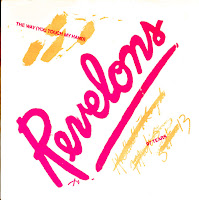 The Revelons were NYC four piece that were around from 1978 to 1983. During that span they released this single, as well as having two cuts on the Marty Thau Presents 2x5 comp. They often served as the house band at CBGB'S, and  Playboy called them New York's best underground band in 1981. If you want to read more about The Revelons, I found THIS MYSPACE, for you. The Revelons reformed in 2002 to release a compilation CD called "Anthology", and then In 2008 released a full length called "Pop-Ism!"; you can pick the discs up by following the links. (Sorry for the poor scans, for some reason my scanner had trouble with the colors on this one)