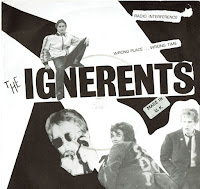 The Ignerents were a four piece from Whitstable, Kent that formed in 1977. This was their only single; it had two pressing's, this being the first. They also had a couple of cool tracks in 1980 on the First Offenders comp; you can give them a listen HERE and HERE. In 1981, they evolved into The Beekeepers and released one single; also on Rundown Records. If you're interested in reading more, HERE'S a blog that documents the bands history.

The Last Ones (Number One Again EP) 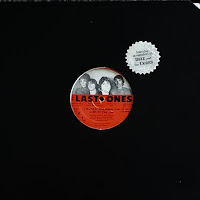 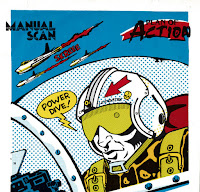 a repost by request, originally posted 3-6-10, new post, rip and scans, enjoy!
Manual Scan were a four piece from San Diego, CA that formed in 1981. The first lineup consisted of Bart Mendoza on vocals and guitar, Kevin Ring (later Kevin Donaker-Ring) on guitar and vocals, David Fleminger on bass, and Paul Kaufman on drums. Throughout several lineups, the core of Mendoza and Ring remained.
They released a string of singles (this being the first) and a full length before disbanding around 1991. Throughout their existence, the band toured extensively throughout California and Arizona as well as England (the 100 Club and the Marquee, among other venues) and Mexico.
Other members have included Paul Brewin (later in Drip tank, Uncle Joe's Big Ole driver); David Anderson (Trebels, Gravedigger V); Joel Kmak (Hitmakers, the Farmers, the Penetrators); Brad Wilkins; Rob Wilson; Bobby Allend; and Morgan Young; as well as guitarist Ritchie Rooster and saxophone player Joe Asaro..
Mendoza and Ring are currently members of the Shambles, along with Mark Z, formerly of the Crawdaddys. Here's their website , go check them out. Manual Scan played a reunion show at the Casbah on January 30, 2010. Around the same time, they performed on CW-6 TV’s San Diego Living program, as well as convening at Signature Sound Studios with producer Alan Sanderson to record a special edition of the Pyles Sessions, to be broadcast on host Tim Pyles FM94.9 show. Info borrowed from The San Diego Reader web site. 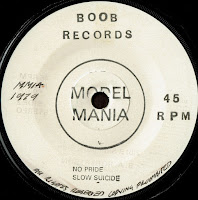 Model Mania were a Birmingham four piece that formed in 1975. Three of the band mates are brothers. This, their only record was released in 1979 on their own Boob Records. A 1000 copies were pressed, the first 250 were hand stamped, the remainder have proper labels. A name change to Power Farm, in 1982 brought about another single titled, "Which Way U.S.A" the following year, also on Boob Records. I've never heard it, so I have no idea if it's any good?