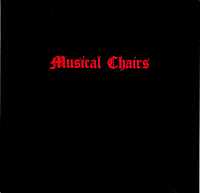 As is the case with many of the records posted here; info on The Musical Chairs is pretty much non existent. If anyone knows anything about these guys, and would like to comment, or contact me, it would be much appreciated. Far as I can tell, the Musical Chairs were a three Piece from Minneapolis, Minnesota. I found a full Length titled “Fall On Deaf Ears”, that I’ve never heard. Other than that, I can’t find any other releases; including this one. I did find this Myspace, and this Reverbnation page belonging to a Dave Matthies, who resides in Houston, Tx. In his bio he mentions a band called D.C.Matthies & Co., also containing Don Stanley; so I’m assuming it’s the same guy; but he doesn’t mention The Musical Chairs. 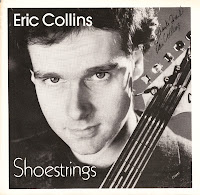 "Update" At Eric's request, I've shortened the Download to two songs, I picked my favorites. Hopefully in the near future this will be re-released with bonus material; if so I'll keep you posted, as to where you can get it.

Wow, I can’t Believe it’s been almost two, and a half months, since my last music post. Here’s a great Low-fi Powerpop Ep that’s high on charm.
Eric Middendorf, was born in Akron, OH in 1955. Seeing the Beatles on the Ed Sullivan Show in 1964, (as was the case with many people) had a lasting, and profound affect on not only his musical tastes, but the direction his life would take as well. That same year The Cleveland Browns won the NFL’s Championship game upsetting The Baltimore Colts 27-0. Not only was Eric at the game, but he got to watch his hero Gary Collins (whom he would later borrow his stage name from) catch three touchdown passes, set a new record for a championship game, and win most valuable player.
Eric received his first guitar as a birthday gift at age 13, and started taking Guitar and Piano lessons from his brother-in-law, a Professor of the Cleveland Institute of Music. While in High school, he appeared in various outfits; playing pop/rock, hard rock, soft rock, 50’s retro, and blues music.
In college Eric spent time as a DJ; he came upon the first two Big Star LP’s, and completely flipped for them. After going through the entire music library; he began to realize his musical tastes gravitated toward something known as "Power Pop." Hearing home-recorded LP’s by Todd Rundgren, Shoes, and Emitt Rhodes; got him thinking about making his own home-recorded album. So he bought a TEAC reel-to-reel 4-track and put together a makeshift home studio.
Eric met Brian Scherer after answering a bands ad in the paper seeking a rhythm guitarist. They quickly realized they were on a different musical wavelength, than the rest of the band, and decided to form a duo. The two started planning Shoestrings; EP’s were big at the time, and in any event, they didn’t have the funds to even consider a full-length LP. Brian played drums and sang backing vocals, while Eric sang and played guitar, bass and keys. Peggy Rakas, a high school friend, added backing vocals on "Window." Brian and Eric had just two or three mics between them; they borrowed a reverb unit from someone, and recorded whenever they could, Shoestrings was a decidedly low-fi affair. It took several months to complete the five songs, 500 copies of the EP were pressed.
There were many giveaways to magazines and radio stations. The record received mixed reviews, and unfortunately not many were sold. A batch were sold to Disques du Monde in New York, but no payment was ever received for the records. Brian, and Eric started working on another batch of tunes, with plans for a second EP featuring six songs. The problem was, the profits from the first record were to pay for the second...and there just weren’t any. Months later, Eric received a royalty check listing "Window to the Sky" and the names of about twenty countries. He called BMI in New York, and a man told him the royalties had emanated from Spain, and that the song had been used in some Spanish film. Anyone know the name of the film? If so it would be great if you could share it with us. The record must have somehow made its way from New York to Spain, out of the DdM batch, so even though they were never paid; they ended up making a few bucks off of them after all!
After Shoestrings, Eric wound up joining a local band called "Max Wheel and the Sheades" (as in "The Beatles at Shea Stadium") mainly playing bass and singing backing vocals He gradually became a non-playing member, and concentrated on songwriting and recording demos. The band ultimately used something like 150 songs he wrote or co-wrote.
Eric is currently back in the studio working on his first recording session in a while.
Although nothing has been decided yet; the possibility exists that "Shoestrings," may be re-released with some bonus tracks or a companion disc, stay tuned.

I wanted to thank all of you for you're comments, Emails, and well wishes. It's funny, for something that I started, just to kill some time; this site has become much more serious than It was ever originally intended to be. Anyone that's followed this blog from the beginning knows that I've had my share of drama, problems, ups, and downs. For some reason, although I'm usually conflicted on the subject, I've found it very difficult to walk away, so I've decided to carry on. Since I'm starting over somewhat, I gave the blog a subtle face lift, and I just purchased 1 year of Mediafire. I had them before, and found them to be very professional, and easy to deal with. The only reason I left them in the first place was, I was using too much bandwidth; and it became rather expensive, which leads me to this. I'm not going to re-up my download links again; for starters, there's 500 files, and if that's not daunting enough, I'll run out of bandwidth again. So from this point backward, the post's on this blog will remain for reference purposes only. I will however at my leisure, re-up old links from time to time; and I may be persuaded by request to bring a post back for download if asked nicely. Thanks again for all of you're support, I'll be back soon with a new post; here's to another year!
Frank
Posted by Frank Miller 15 comments: