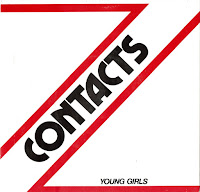 Big thanks to Bruce, from the excellent My Life's A Jigsaw Blog, for help with this one! Contacts were a Poole Dorset, England four piece and this appears to be their only record. Andy Janik had been in earlier bands called The Mopeds & the Shades.
Ian Sandy was later in the Da Biz & Biz International with Ronnie Mayor (Producer of this 45 & Earlier in "The Tours") He was also in Cinema 35. Sound clips of these and many other bands can be heard Here.
Line Up -
Andy Janik - Vocals, Guitar
Marc Ford - Guitar, Vocals
Andy Park - Drums
Ian Sandy - Bass
Small Operations Records 1980
1. Young Girls
2. Boyfriends
♫♫►►I'm Too Young To Die◄◄♫♫
Posted by Frank Miller No comments: 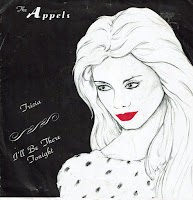 The Appels were an Austin, Texas four piece. Unfortunately, that's about all I have on them. The sleeve was my only source of info. 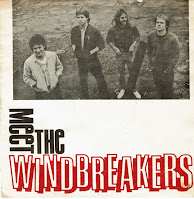 The Windbreakers were a Jackson, Mississippi based four piece, that formed in 1981.This was their debut Ep, released on their own Big monkey Records. They released At least: five full lengths, two more Ep's and a couple of comps, before disbanding sometime in the early 2000's.Line Up
Jeff Lewis - Guitar, Vocals
Tim Lee - Bass, Vocals, Guitar
Bobby Sutliff - Guitar, Bass, Vocals
Eric Arhelger - Drums
Big Monkey Records - 1982
1. Young Republicans
2. The Girl For Me
3. That Girl
4.  Black and White
♫♫♫►►They Don't Walk And Talk Like Me◄◄♫♫♫
Posted by Frank Miller 6 comments: