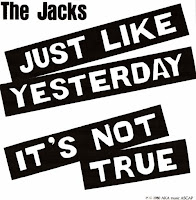 Here's a fairly scarce one. Best I can tell; The Jacks were a Tulsa, Oklahoma three piece, formed by Walter Kleinecke around 1976. After several line-ups, the band called it quits in the mid 80's. Besides this single, I found a track titled "Pretty Poison" on a Explosive Records Comp. Not sure if they officially released anything else.
***UPDATE***
The Jacks aka Tulsa Jacks just released a compilation album on Reminder Records. Contains previously released and unreleased material! Pick up your copy Here
https://www.reminderrecords.com/shop/p/the-jacks-make-em-cry-lp