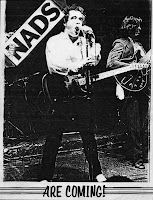 I posted this record a while back; but this re post has far superior sound, and band info, as well as some great bonus tracks, Enjoy!!
The Nads story begins, as the 70’s were coming to a close. Larry Brown was trying to decide if he wanted to be a lawyer; while attending Catholic College in Providence, RI. Unhappy with the American charts, which were mostly populated by Disco at the time. He became interested in the Punk and New Wave scene brewing across the pond. The music was brash and reckless, while maintaining a fun simplicity that beckoned inclusion to anyone who wanted to be part of it. Inspired, Larry picked up his guitar, churned out Blame It on the Priests, and thus ended his College Endeavor.
Larry, along with Shane Williams, one of his best friends from high school; decided they would form a 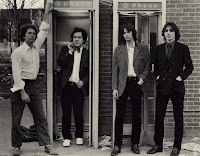 band. The two were big fans of the 60’s British Invasion and felt this new music linked back to it. Having never played bass in his life Shane went out and bought a Hofner. He learned to play quickly, as the two arranged from an ever burgeoning songbook that was being compiled. One day while playing The Sex Pistols, marveling at the emotion, and the intensity of the music; the two were laughing at the absurdity of their name.” They might as well call themselves The Gonads, or Nads or something!!”. As the l

aughter diminished, they looked at each other; and after a nod of understanding – The Nads it was!
Classified ads were placed in the local free paper, which brought Rick Zeigler in on drums and Bob Kropp on guitar, completing the line-up. Things took off quickly from there….. The reception to the band was strong, especially given the musical climate of the times.
There were three separate studio recording sessions; the last one produced the three songs that make up this Ep. 1,000 copies were pressed, as well as a number of buttons/pins picturing the Nads logo; some of 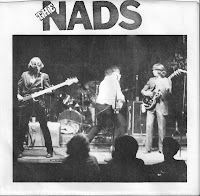 which were thrown into the crowd at shows. They played all the requisite places, Lupo’s Heartbreak Hotel, The Living Room in Providence, The Rat in Boston, CBGB’s and Hurrah’s in NYC. The RI press was especially supportive and featured the band several times in the area papers. They gigged regularly with bands like the Neighborhoods, Robin Lane and The Chartbusters, The Schemers and Human Sexual Response; as well as opening for bands such as: Mink DeVille, U2, and Squeeze. Glen Tilbrook of Squeeze became a friend, and had agreed to produce their follow up record, but the band broke up before it happened.
The Nads last gig was Nov 17, 1981 opening for U2 in Providence on their second US tour; after that, Bob Kropp dropped out to pursue other interests. They spent a year or so auditioning guitarists and surviving moves to CT and NY. Bob Kropp finally rejoined the band, but by then Larry had enough and decided to leave. The other three carried on and enjoyed success under the name Action Faction, with a new lead singer.
Bob Kropp is still active as a songwriter, producer and musician in Nashville. Rick Zeigler owns Indy Records in Indianapolis and Shane Williams lives and works in the NY metro area.