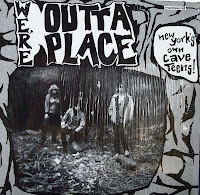 This next post, is in memory of my uncle Paul, who passed away this last summer, at the way to young age of 53 . Paul and I went to many record stores and record shows together . We also shared a love of garage music . We could listen to a song with a great harmony ,organ ,or guitar lead. and I new by the smile on his face, that he felt the music just as I did. he got it !! I miss him already and hope that theres some great garage tunes in heaven that he can party to. This was one of his favorite records .This band sounds like Neanderthals banging rocks together" The band started in 1982, played their first show in 1983 and played their last show breaking up in 1984. The band released two EP's on Midnight records before disbanding. "We're Outta Place" released in 1984"and "Outta Too!!" released in 1987. "We're Outta Place" was the first record to ever come out of the N.Y.C. garage psych punk scene. It preceded the Vipers and Fuzztones singles by nine months, and created quite a stir from those more mature garage bands who could not understand why the "cave teens" had been elected and selected first.The answer to those questions came soon with world-wide acclaim. The mini-LP immediately hit number 1 in the alternate charts in Italy, France, and Holland, and received rave reviews in the U.K., U.S. and Canada.Chandler's vocals and the Outta Place's straight fresh delivery will probably never be equaled or surpassed. They also have a myspace http://profile.myspace.com/index.cfm?fuseaction=user.viewprofile&friendid=201002192 go check them out.
.
MIDNIGHT RECORDS 1984
.
***DOWNLOAD***
Posted by Frank Miller

this was not the first record I came accros many years ago now, but it is one of my faves! I was fortunate enough to see these guys a couple of times before chandler ended up in the raunch hands, which were fun, but not as fun as the outta place.

Do you have the other record by chance??

I USED TO HAVE IT. I'LL CHECK AND IF I STILL DO I'LL TRY TO GET IT POSTED FOR YOU.
THANKS FOR THE COMMENT!!!!

Thanks a lot for this record pal! I have been searching this lp for a long long time.