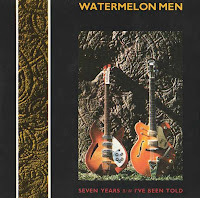 (By Request....Originally Posted 2/25/09... New Rip And Scans)
The Watermelon Men were a Swedish five piece that were around from the mid Eighties up till 1994. During that span they released at least, three Lp's, an Ep, and a couple of singles. I read Here, guitarist Imre von Polgar died in the tsunami disaster in Khao Lak in 2004. Shortly after, the band reformed for a one time show in his memory.

here's some info from the great digivinyltal.blogspot.com:

The Watermelon Men were a great Swedish band. They put out a record, "Past, Present, and Future" in 1985 that turned out to be an appropriate title. The album is full of infectious sophisticated pop and appeared on several 'Best of' lists for 1985 in Sweden. In 1986 they released a second album called "Wildflowers" with the production of Clive Gregson. Only the last "Moving Targets" were released as a cd.

I'll put up the past, present and future album and I also have the four stories plus which I'll tack on as well. Both discs highly recommended, after that I'm afraid The Watemellon Men went downhill for me. The later discs are a watering down of a great band.

I have the lp, but not the four stories. thank you

"Past Present & Future" and "Wildflowers" WERE released on CD, but only in a very low amount. I finally got both of them which took me al very long time..

If anyone is interested - Wildflowers is available on EBAY at the moment. You can buy it straight away for almost 50 €, or try to get it for less. I proposed 15,- and it worked out :-x

Thanks for this single which boasts one of the nicest cover artwork ever.
Great Swedish band, for sure!!!

Always great to read that there´s people still listening to our Music.
Agree with the downhill slope!
Although we did record some things at a later time that was definetly good although not released.

Hopefully one day we'll get to hear some of that material; Thanks for the comment Johan.

Past, Present and Future was one of my favorite albums of the 80's. I had many of the songs on mixed tapes and people always wanted to know who it was. Sadly I lent the album to someone I did not know that well and never saw it again. "You Should Be Mine" popped into my head today, and I decided to try and see if I can get a CD or digital recording of the album, and I found this site. Nice to know there are others out there.

That sucks, it's tough to trust anyone; even when you do know them well. Thanks for the comment.

I bought this record on the strenght of the cover alone -I didnt know who the band were but the band name suggested it would be worth checking out- as I was into Mod, 60s and Garage stuff)- I found it in a bargain bin in Glasgow for 10pence i think. Took a few listens but whoah what a song! Great B-side too. Glad when this tune got recognition on the Children of Nuggets box set.Brilliant vocals and guitars, a truly sublime , haunting and soulful record...

Summed up very nicely, thank you for the comment.