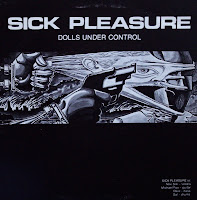 When I listen to this record, I cant help but think of the Target videos. Do you remember the Sick Pleasure video with Niki Siki slicing his chest bloody?I like that one, it's a different version of the song, and it seems at least, that they're playing it live. Code of honor did Stolen Faith. It was cool to see them doing the song but, if I remember right it was kind of an obvious lipsink. Anyway, this is an all time classic California punk record. These stories are taken from the bands Myspaces. I had to edit them down to keep the size of the post down. Go check them out,they are great reads. It was 1980-81 and SF's The Tools had just broken up leaving guitarist Mike Fox without a band. He teamed up with skateboarders Sal Paradise and Dave Chavez and the infamous Niki Sicki. A nihilistic mother fucker who formed Sick Pleasure with no moral or political goals in mind. Thus the great Sick Pleasure was formed. The band lasted until 1982 when it just "wasn't fun anymore". At this point Sick Pleasure had no material on wax and it seemed as if they would go down in history as another forgotten band of the hardcore era. The three members aside from Nikki went on to form Code of Honor and Nikki went on to form Verbal Abuse in Houston. In later 1982 after Code of Honor had established themselves they released a split with the now deceased Sick Pleasure. The A-Side was 'Fight or Die' by Code of Honor and the B-Side was 'Dolls Under Control' by Sick Pleasure. The record is a classic with solid songs on both sides. A year later Subterranean (Mike Fox's label) put out yet another Sick Pleasure release, further establishing their place in hardcore history, this self-titled EP was faster and more hardcore than the LP, but still retained the same snotty attitude as the previous release. Sick Pleasure is now remembered as an infamous nihilistic, snotty, fuck-all punk rock band, and rightfully so. 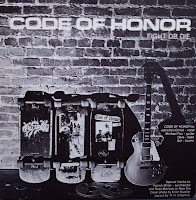 Code Of Honor formed in San Francisco in late 1981 after the sudden end of the hardcore punk band Sick Pleasure, when guitarist Mike Fox, bassist Dave Chavez, and drummer Sal Paradise were left without a singer. The following is from a band history written by Mike "During Sick Pleasure's activity, I kept producing bands and Steve and I kept releasing records, including two separate Society Dog singles. We both dug them. Their singer, a friend of Steve's named Johnny [aka Johnithin Christ], needed a place to live, and since we had a room for rent at Guy Place, he moved in. One day he was in my room and noticed the "code of honor" poster I had drawn, said that "code of honor" would be a good song title, and I agreed. We worked out lyrics that encapsulated my code of honor, deciding to name a band that too. I called Dave to ask if he would play bass, he agreed, and Sal agreed to be the drummer. We recorded several songs right away, enough for half an album. I didn't want to ditch the Sick Pleasure recordings, so we released an LP with Code Of Honor on one side and Sick Pleasure on the other. "In 1982 we did a US tour with Fear, but after the Seattle show Fear split from the tour when Lee Ving's agent called and told him he got the part of the sleazy guy in "Flashdance." We were booked in Canada for 2 weeks at 3 venues. We played through the USA, SF to New York, back thru Texas and New Mexico on that tour. "Around '80_'83 most of the great Southern California bands were banned from playing because of riots and attacks by Nazi jocks and the cops, so we got them playing here in San Francisco to escape the fascist pigs and government in LA. At every gig we played in LA, the cops busted the show and some heads. In 1982 we played at the Olympic Auditorium in LA downtown (the place holds 3_5000 people) with GBH, the Dicks, MDC, Discharge, the Dead Kennedys, and maybe 3_5 more bands. 5 or more ambulances came to take away people. "The Code Of Honor theme song states my own personal parameters of living my life. I have shared it with people in recording and life. It is all I need (the 11 codes) to deal with any situation, helping me with personal growth and to take responsibility for all. Also I'm still big on disbanding the Federal government. Code Of Honor lyrics suggest one man can achieve anything and be secure in choice and results." Other than a couple of compilation tracks, the band had only 3 releases during its existence: the split LP with Sick Pleasure, the "What are We Gonna Do?" 7" single, and the LP "Beware the Savage Jaw." Code Of Honor came to an end just as the final mixdown on that album was being completed.
.
REFERENCES - SICK PLEASURE MYSPACE http://www.myspace.com/foolscantbreakme
CODE OF HONOR MYSPACE - http://www.myspace.com/codeofhonorbitches
.
SUBTERRANEAN RECORDS 1982
.
***DOWNLOAD***
Posted by Frank Miller

Two of my fav US hardcore bands of all time. I love Code Of Honor.
Cheers Frank!!

thank you for posting this

I was at that Code Of Honor gig at the Olympic with Discharge. What an amazing show that was!

Excellent, who was the highlight of the night??

The Dicks were the highlight and the punks kept spitting on them because they weren't hardcore enough.

I never got to see them live, but I know someone who saw them at City Gardens in Trenton N.J years ago. The Dicks were an intense band.In England I think the spitting would have been a compliment.

I got to see the Dicks again the following year at the Olympic with Subhumans (UK). They used to play quite a bit in L.A. since S.F. is only 250 miles away or more.

The time I spoke of before was my Uncle.He saw them opened up for D.O.A. It was a Alternative Tenticles tour.The fist single and Album Are total Classics.