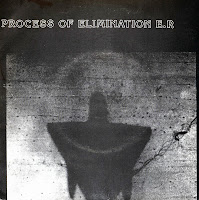 a repost, by request, originally posted 11/18/09, new rips and scans, enjoy!
Here's the classic Mid West V/A Process Of Elimination E.P. Their were three pressings (that I know of) of this record. Mine being a third, with the yellow labels. The original Process of Elimination artwork was by Jeff Nelson (Minor Threat/Dischord Records), but got lost in the mail. Early ads for the Process EP featured a completely different mock-up of the cover, presumably based on Jeff's art. My favorite on here is the great early version of Toxic Reason's Riot Squad, with the fix running a close second. The Necros track is cool too. Honestly except for maybe the Mcdonalds track (which I think is a joke) There all good. I didn't have the room to include all of the band bios but, I put links for most of their Myspaces.

Hey Frank..could you please re-up this one. Thanks!

You got it Daz, sorry it took so long.

I've always wondered - what is the image on the actual cover from?

Good question, I honestly have no idea?