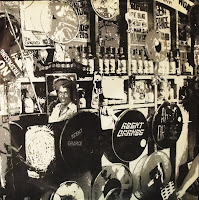 Every one of these that I've ever saw was on clear vinyl, numbered, and autographed by the band. So, I guess I'll assume they were all that way. I'm not sure how many were pressed? What you get is two great covers; Secret Agent Man, (made famous by Johnny Rivers) and Shakin All Over (originally done by Johnny Kidd and the Pirates ). Agent Orange formed in Orange County California in 1979. They first gained attention with their song Bloodstains which they released on their own, as a 7" E.P. Original members were; Mike Palm, Scott Miller, and Steve Soto, who later left the band to form The Adolescents. James Levesque joined the band on Bass, and in November of 1981 they released their first LP Living In Darkness on Posh Boy Records . This line up also released a couple of E.P.'s, a second LP titled This Is The Voice, and this single. In 1988, Brent Liles replaced James Levesque on bass and later that year, Agent Orange recorded Living In Total Darkness, which was a re-recording of the original Living in Darkness album with a few new songs mixed in. This album did not go national and very few copies exist. In 1989, Derek O'Brien replaced Scott Miller on drums and in 1990, Agent Orange recorded Real Live Sound. This is the only Agent Orange recording to feature the Palm/Liles/O'Brien lineup. Sam Bolle replaced Brent Liles in January 1992, and remained with the band until May 2003, when he left to join Surf Guitar Legend Dick Dale's band, where he remains to this day.
.
REFERENCES - WIKIPEDIA AGENT ORANGE OFFICIAL WEB SITE BEBAD . US ENTERTAINMENT
.
INVISIBLE RECORDS 1986
.
1. Secret Agent Man
2. Shakin All Over
.
***DOWNLOAD***

amazing band! Thanks a lot for sharing this awesome stuff. do you have the retreads 7''? and Agony Column's ''love is a blanket expression'' 7''?

Hi Steven, I have The Agony Column, But the Retreads is sadly still on my list.
Thanks for the comment,
Frank

There were 1000 of the secret agent man clear 45 vinyl's pressed.
I got mine in April 86 when they visited Chicago.