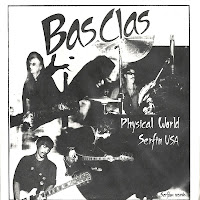 Bas Clas, were a Louisiana four piece formed by brothers Donnie & Steve Picou in 1976. The band name is derived from a Cajun insult/expression meaning "low class." In all they released three singles,(this being the second) on their own, and a CD in 2008 which compiles the singles along with other early recordings. From the beginning the band endured multiple lineup changes, and by 1991, still without a record deal, they decided to call it a day.There have been a few reunions since the break up, HERE'S a link for their official site. You'll find a much more detailed history of the band, along with other Links there.
.
Serfdom Records 1981
.
1. Physical World
2. Serfin USA
.
***DOWNLOAD***
Posted by Frank Miller