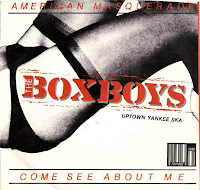 The Boxboys Formed in Los Angeles,around 1978. They're credited as being one of the areas earliest Ska bands. Band members were; Betsy Wiess,(vocals) David Loren Burg,(guitar, keyboards, saxophone) Larry Monroe Monroe,(guitar)Scott Ska Sigman,(keys)Ivan Wong, Jr.,(bass)and Greg Sowders(drums).They recorded two singles, this was their first. Their second Skaletons in the Closet also featuring Betsy on vocals, however when it was released, she had just left the band. After leaving the Boxboys Betsy went on to front the 80's Metal band Bitch.The Boxboys replaced Betsy with a new singer named Lisa Bosch, however shortly after, the band soon came to an end. Here's A Myspace to check out.
.
Zone-H Records 1980
.
1. American Masquerade
2. Come See About Me
.
***DOWNLOAD***
Posted by Frank Miller