The Marigolds (I've Had Enough EP) 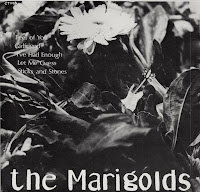 The Marigolds were from Perth Australia. They formed in 1985, and put out two singles, this being their first.. The band endured multiple lineup changes before eventually calling it quits in 1987. They reformed in 1989, and released their lone full length titled "Wild". You can find a more detailed band bio HERE !
.
Cherrytop Records 1985
.
1. I've Had Enough
2. Feel Of You
3. Sticks And Stones
4. Let Me Guess
5. Girlfriend
.
***DOWNLOAD***
Posted by Frank Miller