Protex (I can only dream single) 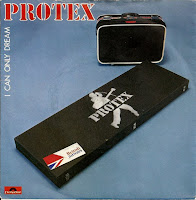 Protex were an Irish four piece from Belfast That formed around 1978. The band consisted of; David McMaster, (vocals and Guitar) Aidan Murtagh, (vocals and guitar) Paul Maxwell, (bass) and Owen Mcfadden on drums. Before the bands end in 1981 they released 1 single on The Good Vibrations label, and 3 for Polydor.(this being the second)
They also had a few tracks on comps such as Made in Britain, and 20 of another kind. An lp's worth of material titled Strange Obsessions was recorded, but as far as I know was never officially released. Sing Sing records recently released it, you can find it HERE!
If your interested in learning more about Protex, here are a few places to start; Irish Rock. org , and The Mod Pop Punk Archives .
.
Polydor Records 1979
.
1. I Can Only Dream
2. Heartache
.
***DOWNLOAD***

One of the most underated Irish bands in my opinion. Cheers for this one :)

"The file you are trying to access is temporarily unavailable."

I just tried it Jay, and it worked fine. Maybe it was something with Megaupload.