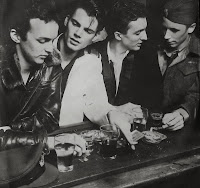 Per request, a re-up originally posted 11/20/10, new rips and scans
Blue Peter were a four piece from Toronto Canada, that were around from 1978 to 1985. In All they released four full length's, two singles, and an E.P. titled Version. Included here, are my favorite tracks from their first three LP's. It's cool to hear the transition from a Pop/Punk outfit, to more of a main stream sounding, New Wave band, while maintaining a knack for writing excellent songs. That's something only a handful of bands were able to accomplish. Linked above is a very well done site with all of the information you could want on Blue Peter, as well as reissues of their LP's, Links, and other Releases.

Super post!! Thank you very much for sharing this music.

Your welcome Jaime,glad you enjoyed it.

I've liked the Radio Silencie songs a lot. Where's My Angel is my favourite. Thank you.

I've never listened to this band. The first album are great. Thankx a million for sharing.

Didn't knew he made more albums...only knew their test patterns...interested in the rest

Thanks for all of your comments, glad that you enjoyed the records.

Played the hell out of Test Patterns when it came out, really dig this band, thanks for sharing

wow, a band right from my backyard, and i've never even heard of them. this is pretty great. apparently the first album was recorded in london. that's cool, i frequent there since my uncle lives there.

all these songs on your best of are quite good. my favourite has got to be 'attraction'. great driving rhythm. i went on their site you linked, and what a site it is. so much info and every song they did. wish more bands had sites like that. after streaming the rest of the records there, i've come to the conclusion that i actually like that 'up to you' one the best, which seems odd. the songs you upped of that one are so catchy. plus the title track is a great, straight funk song.

thanks for the up!

Definitely brings back memories!Many thanks.

Your welcome Zach, glad you like the band. On a side note, a few years back I was watching this pretty funny movie called Suck. It was about a band's sudden success due to the mesmerizing prescience of their front woman, who was bitten and turned into a Vampire. Their success however comes at a price as they try to maintain the band as well as feed their singers appetite. Anyway, if I remember right there's a part of the movie that has the band driving around touring, with Blue Peter "Same Old Place" being the musical backdrop for the scene. I thought it was so cool someone used that song in a movie...

Your welcome Doug. Happy I could help you reminisce a little; thanks for the comment.

thank you bro for all these gems-best wishes from Spain

they played my high school.only time I ever saw them.. around the time video verite was big.. in a Canadian that way is....

listening to it I realized I saw them open for men without hats.. ahh the 80's....

Hi Deadboy, thanks for the comment. Did Men Without Hats play your high school?

oh yeah i remember hearing about that movie, cause of all the stars in it. never actually saw it, but that's cool they used the song.

menwithout hats played with them at the kingswood theatre (Canadas wonderland-1982?)

menwithout hats played with them at the kingswood theatre (Canadas wonderland-1982?)

Sadly, Paul Humphrey of Blue Peter just passed away.
Can I get a re-up of this album?
Thanks

Sorry to hear about Paul. My condolences to his family and friends. He had a great voice, R.I.P. Thank you for sharing the information. I just tried the link and it works fine.