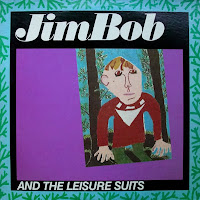 Jim Bob And The Leisure Suits were a four piece from Birmingham, Alabama that formed around 1979. I've read claims they were one of the first Punk bands to come from that area. They released two singles, and this LP, on their own Polyester Records Label. Out of the three, this is my favorite; by 1983, the band called it quits. Band members were: Leif Bondarenko, Matt Kimbrell, Henrik (Mots) Roden, and Craig Izard. Roden and Bondarenko went on to form the Primitons with Brad Dorset. Kimbrell joined up with the Ho Ho Men and The Mambo Combo. Sadly, Matt Kimbrell passed away last year, at the way too young age of 51 years old; If you would like to read more about him, you can check Here.

Thanks, this looks fantastic but only three songs on the rar file. could you please reup the rest of the album? best,

Hi Karen,
I'm posting a few EP's and LP's with only a few of my favorite songs from each one. If you like any of the records; I don't think any of them are too hard to find or that expensive.Thanks for the comment!

amazing record. just played it today after it was sitting in my 'play' pile for the better part of a year...
would love to mp3s if you ever post again...

great record! just played it for the first time today after it was in my 'play' pile for the better part of a year. would love the mp3s if you care to send since the links are down.
-andy