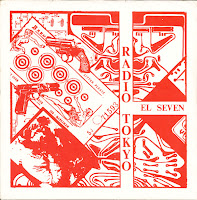 El Seven were a Reading area four piece that formed towards the later part of the 70's. This was their first release; they also had an EP called Magnifico, that I've never heard. I think they decided to called it quits, around 1982. Both sides of this are well played, catchy, UK Powerpop; but if I had to pick, my favorite is Turn Out The Light.

Fantastic band! This one was already posted at Deabeats blog around a year ago (http://rbkwh.blogspot.com/2010/10/el-seven-radio-tokyo.html), as well as their second 45, was posted two days later over at My Life's a Jigsaw blog(http://mylifesajigsaw.blogspot.com/2010/10/el-7-magnifico-ep-1980.html#comments). So, you can find it there.
Cheers!
Helen

Thanks Helen, I don't even try to keep track of who post's what; to me, that's like saying only one radio station is allowed to play a song. Honestly, it's not something that I try to do intentionally; but it happens from time to time. I literally have a few hundred singles from my collection, in stacks waiting to be posted; plus I’m always adding new ones. In short, I‘m just posting records that I like. I’m a big fan of both of the blogs you mentioned; I’m surprised those post’s got by me; I’ll have to check them out, thanks.

I just checked, and the download from the Deadbeats and no ones blog is no longer available. I downloaded the Magnifico Ep; and I was a little disappointed. I don't think it was quite as strong as this one; anyway, thanks for the info Helen!

Thanks for the plug Helen B!!!!

Frank, I agree that Magnifico is the weaker of the 2 45's.
I've updated the post so it also links to here & Deabdbeats.

Hi Bruce, It was still cool to hear it, somehow I missed that one. Thanks for the comment , and the link.