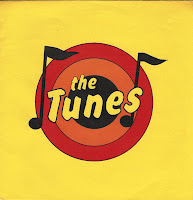 Here's another re-post from August 22, 2010. this is a new rip of the record with new scans. There's a number of my favorite records that I plan on renewing. But rather than getting too caught up in the past; I've decided (at least for now) to adopt a something old, something new type format, so I'll be posting two records at a time until most of my favorite records have been re-posted.

The Tunes were a four piece from Topeka Kansas. They formed around 1978, and lasted till 1983. This was self released, and I believe their only record. Members went on to form bands such as The Brats, Sons of Liberty, and Psychic Archie.

***The Tunes***
Posted by Frank Miller

Thank you very much for this fantastic ep, and for all, of course.