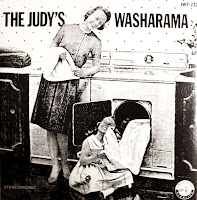 This re-post is from 7/22/12, same scans, new rips. This is a request for someones 52nd Birthday......"Happy Birthday"!!
The Judy's formed in Pearland, Texas around 1979. Originally a four piece; guitarist Sam Roush, was killed in an automobile accident two weeks before the release of their first EP Teenage Hangups. The decision was made to keep the band a three piece, lineup was: David Bean, (Vocals, Guitar, Keyboards) Dane Cessac, (Drums, Vocals) and Jeff Walton (Bass, and Vocals). The Judy's went on to release Three LP's, another EP, and a Single. You can further research the band, and buy their releases at the Wasted Talent Records Website, linked below. The Judy's are still around in some form, at least as of 2008 anyway.