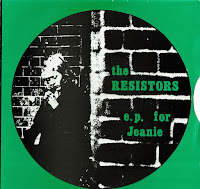 Keeping with the Irish theme..
The Resistors were a Dublin Ireland outfit, that formed in 78. They released a song titled, "Service with a smile" on a Kick Records sampler titled, "Just for Kicks, (you can hear it here) and this self released e.p.; before disbanding in 1981. Paul O'Reilly and Tim McStay continued writing songs, signed to Scoff records and release a single titled, "That's it", backed with, "Steal my love" in 1983. Shortly after they called it a day.