God's Lonely Men - All This and More 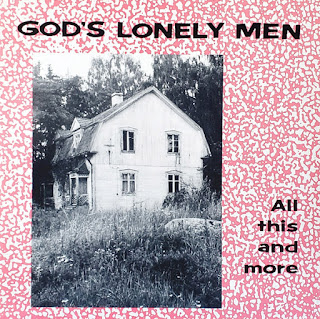 God's Lonely Men were a Salo, Finland three piece that formed in 1986. They named themselves after the Lurkers tune or possibly the Lp title, not sure . They released this full length, two singles and and a few comp tracks before disbanding in 1992. On this Lp's insert, they list themselves as a three piece but show four pictures? At any rate, it's a solid offering with a number of memorable songs.
A brief re-form in 1999 yielded a mini album titled, "This World" in 2000. I haven't seen any evidence of further activity.
Enjoy! Line Up

♫♫►►Now We Are So Lost◄◄♫♫
Posted by Frank Miller

Frank! Long time visitor who wanted to say "thanks" for all the cool music you've posted here in your little corner of the music blogger universe. I've found a lot of cool, obscure, lost-to-time bands due to your efforts. Keep up the good work!

Hi Pernt. You're welcome. Glad I've been able to turn you on to some bands. At the end of the day, that's what it's all about. Thanks for the comment!

You most likely know already, but the drummer Jarkko played in the Flamin' Sideburns after that, under the name Jay Sideburns.

Actually, I didn't know that. Thank you for the info! I saw the Flaming Sideburns in New York once. Definatly were a cool band!