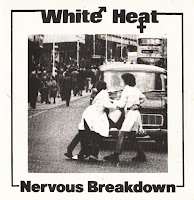 I love this record ! Nervous Breakdown is another one of my favorite powerpop songs . The B side has a reggae thing going on . While not as good as the A side, It's still a strong tune . Formed in 1976, White Heat soon found themselves to be an integral part of the North East music scene, their brand of high energy rock attracting a strong local following.
The band, based around the songwriting partnership of Alan Fish , and Bob Smeaton, also included, the brilliant guitarist Bryan Younger, Col Roberts on bass and, on drums, John Miller 1976-80 and 1981-82 and George Waters 1980-81 . The band's 1st single 'Nervous Breakdown' (released on the independent Valium label) was picked up by Radio 1 DJ John Peel, which lead to healthy sales of the record and, more importantly, brought them to the attention of Richard Branson and Virgin Records.
Two more singles and an album followed before White Heat finally called it a day.
Their break up and last concerts were filmed for the 30 minute Tyne Tees documentary 'Check It Out' and their final gig at the Mayfair attracted a sell out crowd.
To this day the members of White Heat have remained good friends and have collaborated on various projects.
.
REFERENCES - http://www.attention-seekers.com/alan.htm
.
VALLIUM RECORDS 1979
.
1. NERVOUS BREAKDOWN
2. SAMMY SEZ
.
***DOWNLOAD***
Posted by Frank Miller