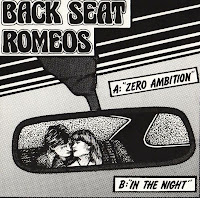 This is a classic powerpop record . Zero ambition is another one of my faves . Following the fragmentation of their previous band in 1977, John Clay, Keith Newby and Rob Hampson brought in the youthful and talented Ash Aisthorpe to play bass in a new band to be called "The Classics".
Based in Lincolnshire / South Humberside - specifically Scunthorpe and Grimsby - the first few months into 1978 were pretty tempestuous - it became apparent after a fair number of gigs that Keith and Rob were not entirely committed to things so Ash and John split and found a new drummer in Mick Freer from Grimsby, whilst retaining the name of "The Classics". At the same time fellow Scunthonian Steve Robinson joined on Guitar and Vocals for a brief period but his time was short lived due to a preoccupation with all things American or the Rolling Stones, hardly credible leanings for a budding Punk / New Wave band.
It wasn't long before the band became a 3 piece for a short period after Steve's departure, until they came across Shaun Ashworth from Doncaster who joined on keyboards ( Shaun later went on to tour the world with Edwin Starr ).
This period between 1978 and 1980 saw the band at their most creative when most of the original material was written and they gigged regularly in the Yorkshire / Lincolnshire / Humberside and Nottinghamshire region where they were good crowd pullers. Early in 1980 Shaun, a talented but volatile personality left the band and The Classics became a 3 piece yet again.
Demoing 3 songs at Fairview Studios in Hull - "Check Her Alibi", "New Generation" and "Zero Ambition", the tapes led to a single deal with Future Earth Records from Doncaster. The band went back into Fairview and recorded the single "Zero Ambition" and "In The Night" ( with Terry Wincott from Amazing Blondel of all people guesting on keyboards ) for subsequent release on 18th Oct 1980, under the new guise of "Backseat Romeos". The name change was due to another band operating under the name of the Classics.
Over the Xmas period of 1980 John had 2 lengthy auditions with Magazine in London and was asked to go back for a full week with a view to joining the band, work commitments prevented this and the opportunity was lost, although Magazine split themselves only a few months later.
Sadly Mick left Backseat Romeos in early 1981 and his place was taken by Trev Fearnley, Johns old drummer from Seagull days in the early 70's. This led to a rockier sound but whilst this line up was potentially the strongest the band had, things were getting tired and by late 1981 they decided to split.
.
REFERENCES - http://www.boredteenagers.co.uk/backseatromeos.htm
.
FUTURE EARTH RECORDS 1980
.
1. ZERO AMBITION
2. IN THE NIGHT
.
***DOWNLOAD***
Posted by Frank Miller

Another great single, man I'm having trouble keeping up!

i can't seem to be able to acces the tag: http://www.mediafire.com/file/gzwwzzzwncl/BACK SEAT ROMEOS.rar

Just click on it, then save, I checked it, it works.