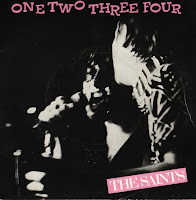 Besides the lp Eternally Yours, this is my next favorite record from the Saints . My copy is the gate fold version . When the Saints first stepped in to a recording studio (Brisbane’s Window Studios) in June 1976, they had already been in operation for three years. The fact that the howling, milestone song they cut, ‘(I’m) Stranded’, had been written in 1974 is doubly prophetic. Issued in September 1976, in a limited run of 500 copies, on the band’s own Fatal Records imprint, ‘(I’m) Stranded’ remains one the greatest singles this country has ever seen.
Alongside Radio Birdman’s ‘Burn My Eye’ EP (issued in October) ‘(I’m) Stranded’ kicked off the Australian new wave movement in a shower of teenage sweat and pure adrenaline. Fuelled by Ed Kuepper’s frenetic, surging power chords, Chris Bailey’s cheap’n’nasty vocal sneer and the reckless rhythmic drive provided by Kym Bradshaw and Ivor Hay, the song was an instant classic. When Bailey snarled “Aw-right!!” at the end of the chorus, you knew it was a celebration: he was happy to be stranded! Writer Stuart Coupe later called the single “powerhouse rock’n’roll” and “desperately exciting”.
From an historical perspective, it’s important to note that this was when the Ramones debut album was still fairly new, and prior to the Damned, the Sex Pistols or the Clash even making it on to vinyl. The Saints seemed ideally placed for a prime spot amid the burgeoning punk phenomena, although the band members themselves didn’t see it that way. ‘(I’m) Stranded’ revealed more of a reverence to rock’n’roll’s timeless tenants than most of the then spiky-topped upstarts would ever have deemed important or even, heaven forbid, creditable.
The single received scant attention in Australia; nevertheless the band sent copies overseas and were swiftly rewarded with glowing reviews in England’s Melody Maker, Sounds and punk fanzine Sniffin’ Glue, plus French paper Rock News. ‘(I’m) Stranded’ became a pioneering international proto-typical punk hit, yet the band still hadn’t played outside of hometown Brisbane; it was symptomatic of the times that Australia just didn’t know what it had in the Saints. Naturally EMI’s UK headquarters ordered the Australian office to sign the band.
Harvest released, the ‘One-Two-Three-Four’ EP in October 1977. In the UK, the EP initially came out as a double single set with gatefold sleeve in a limited pressing of 12 000 copies, which then reverted to the standard, 4-track 7-inch EP packaging. Australia simply got the release as the 4-track 7-inch EP. Whatever the configuration, it was another strong release which matched re-recordings of two cuts from the debut album (‘Demolition Girl’ and ‘One Way Street’) with ragged but inspired covers of Ike and Tina Turner’s ‘River Deep Mountain High’ and Connie Francis’s ‘Lipstick on Your Collar’.
The two covers had been in the Saints’ repertoire for many years, and what seemed to them to be a natural choice was, to many observers, an audacious, surprising and perhaps fool-hardy move. By that stage, the Saints had replaced bass player Bradshaw with Englishman Alasdair ‘Algy’ Ward (who joined in July), and completed work on their second album.
This is a summarised version of some great info on the Saints. The link for the site this came from is below . This is liner notes from a double cd, available from Raven Records . I purchased a copy of it a few years back . If it's still available it's a worth while collection of Saints material . Go check it out .
.
REFERENCES - http://www.saintsmusic.com/raven_wild_2.html /
.
HARVEST RECORDS 1977
.
1. LIPSTICK ON YOUR COLLAR
2. ONE WAY STREET
3. DEMOLITION GIRL
4. RIVER DEEP MOUNTAIN HIGH
.
***DOWNLOAD***
Posted by Frank Miller