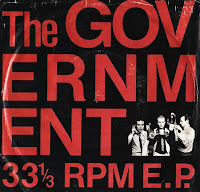 For the most part I'm posting this record for one song. Flat Tire has always been a favorite with me and amongst my circle of friends. Give it a listen, it will sink into your blood as well. The Government was a band from Toronto active in the late 1970s. They became well known on the Toronto Queen Street club circuit, playing such venues as The Crash And Burn, The Edge, Larry's Hideaway and The Beverley Tavern and the Music Gallery. Their album Electric Eye album was recorded live at the Music Gallery as the soundtrack to a full-length video production.
The band was part of the early punk scene which, in Toronto, crossed paths with the art world with regularity. The Government was featured in File magazine, published by General Idea. Andrew J. Paterson was the singer, guitarist and composer of most of their material . He was also a writer and a performance and video artist. The band was an element of his work in this medium, often incorporating music videos and performances by the group for works such as Electric Eye. Other videos by Paterson include Controlled Environments in 1994 and the inter-discipline work Mono Logical in 2005.
The "Flat Tire" ep was recorded at Comfort Sound Studios in Toronto on eight-track analog by Doug McClement. The end of the song is actually from a previous take, which was recorded over, except for the final chord. When Andy Paterson heard the playback, he decided to leave it in the final mix.
.
REFERENCES - WIKIPEDIA http://en.wikipedia.org/wiki/The_Government
.
MODERN WORLD INCORPORATED 1979
.
1. FLAT TIRE
2. GET YOU SLEEPIN
3. ZIPPERS OF FIRE
4. SPONGE
.
***DOWNLOAD***
Posted by Frank Miller

i think this is funny, my girl friend said she don't think its funnyhahaha