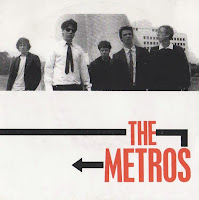 There are two songs on one side of this record and the other side is blank, but I think most if not all of the Rip Off singles are that way. In my opinion Hot-Wired is OK but, Go Mean is a great punk stomper. I'm not sure why they left it off the album. The Metros were a Detroit band that started in the spring of 1998. Musically they had that stripped down 70's punk n roll sound that Rip Off has become known for. Lot's of treble, but maybe not quite as noisy as some of the other Rip Off releases. The band was started by guitarists Mike Williamson and Chris Berlin. The two singles and one album. They broke up in the fall of 2000.
.
REFERENCES - ALLMUSIC http://www.allmusic.com/cg/amg.dll?p=amg&sql=11:anfixqejldje
.
RIP OFF RECORDS 1999
.
1. HOT-WIRE
2. GO MEAN
.
***DOWNLOAD***
Posted by Frank Miller

any chance of posting cd ?

you made me curious

unfortunately I do not have their lp. I do intend to pick it up one of these days. I heard it once and it sounds similar to the single.Glad you liked it.

have you got "i gotta go" the second single ?