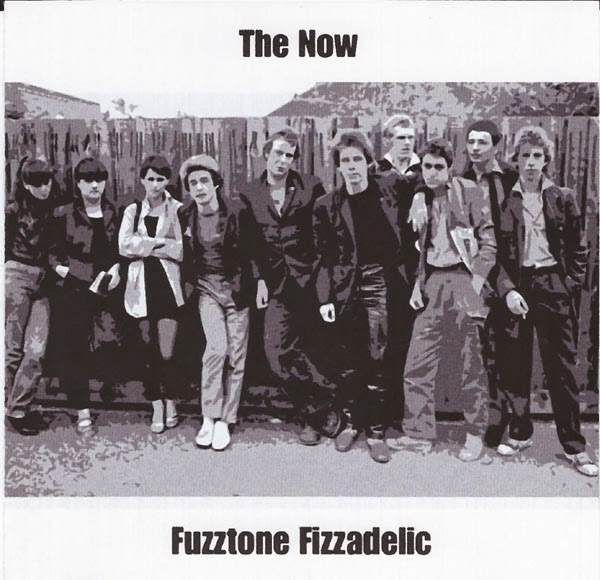 A repost by request, originally posted 6/22/09.The Now are a Peterborough, England four piece that formed in 1976 and as far as I know are still at it today. They released two classic singles before disbanding in 1979, "Development Corporations / Why" on The Ultimate Record Label in 1977 and Into the Eighties / Nine O' Clock on Raw Records in 1979.
2004 brought all four original members back in the studio to record "Fuzztone Fizzadelic". It represents their original set list, as performed in 1977. If you would like to read more about the band, here's a couple of places to start : Wikipedia and Punk 77 .
Line Up -
Mike McGuire - Vocals
Steve Rolls - Guitars
Faz Farrow - Bass
Joe MacColl - Drums
Damaged Goods 2005
♫♫♫...It's easy to pretend you don't care...♫♫♫
Posted by Frank Miller

thanks for youre postings Frank, nice holiday to you

A great album, I bought this as soon as it came out and haven't stopped playing it. Try it and buy it.

Thanks, have a nice break. I have enjoyed you posts.

hey, i need some help if u dont mind

id like to know the name of this band an d the title, if posible
ill try with u and other blogs about more or less power pop. this is a, i suppose, 1980 ish song, possibly american (i really dont know)
maybe they are well known and i´m just an ignorant (i dont think they are very 'obscure'). maybe it´s not the kind you like (certainly is not punk), if u dont like sorry! :) maybe you just heard it in a comp...

HI ANGEL, I LISTENED TO YOUR SONG AND I THINK IF I REMEMBER RIGHT THAT IT'S A BAND CALLED PIPER, THAT WAS FRONTED BY BILLY SQUIRE,THE SONG IS CALLED CANT WAIT AND IF I'M NOT MISTAKEN THE ALBUM WAS TITLED THAT TOO. I THINK I HAVE IT I HAVE TO LOOK THROUGH MY RECORDS.THANKS FOR THE COMMENT

ill try to look that somewhere, to confirm, if possible

HI ANGEL, HERE'S A LINK FOR THAT RECORD YOU WANTED. ENJOY!!
http://www.mediafire.com/file/lunykzjozuw/Piper-Can'tWait.rar

Thank You for the Boys record, I have been wanting to hear it for a long time.I am in your debt.

thanks a lot frank!

If you haven't got The Now into the 80's Demos its over on my blog if you need it.

AWESOME! i've been looking for this forever...thanks!

i was going to write that i posted The Now 1978 demos but Longy already did. i still posted it though if you want to hear my rips and see some really dark photos of my copy, haha.

oh Longy's file is deleted so for those of you who missed out, check that link in the former comment.

Hello,
Thanks for all
Can you, please repost this CD?

You got it Stathis, enjoy!