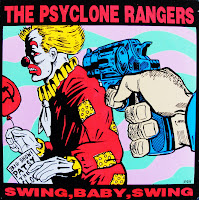 I always thought that if I went to hell someday, that these guys would certainly be on the jukebox. The first time I saw them live The Devil May Care either was about to be released or had just been released. It was at the Funhouse in South side Bethlehem P.A. Anyway, They were really loud but not distorted. They were a wall of swirling, sonic power. I had never heard them before but, It was easy to get lost in their chanting evil sound. I came away very impressed. I saw them a few times after that and they were never quite that good again but, they will always have a special place in my head for that show. For my money The Devil May Care and this single are their best records. I love the great cover of the Beat Happenings Bad Seeds. The story of the Psyclone Rangers starts at Moravia College, outside Allentown, about 60 miles northeast of Philadelphia. There, potential English professor Jonathan Valania had just gotten tired of academic life. He started hanging out in the area clubs.
Well, the two area clubs. One was The Funhouse, the resident college hipster club. The Funhouse was a rundown bar with a strange Hawaiian motif and a torpedo hanging from the ceiling. The place occasionally featured live music, as did the Four G's, the other local dive, inhabited mostly by Vietnam veterans.
The biggest group of the area, the Original Sins, had gotten some national recognition during the '80s, but they had petered out by that time. Nonetheless, Valania had a vision of leading a band who played basic, stripped-down garage punk-rock.
Fortunately, Valania had friends with musical leaning. Scot Danzer played a bit of guitar. Jamie Knerr, whom Valania knew since the second grade, played drums. So they formed a band and practiced in one of the many abandoned warehouses in town, at least before the roof caved in from the snow. They played the Funhouse, the Four G's and traveled to New York and even Philadelphia to gig.
Like any good indie-rock band, they had sent tapes to Sub Pop, Caroline and Top Llama (home of the Young Fresh Fellows). All to no avail.
A break came through a College Music Journal showcase in New York. The band was playing on Wednesday morning at 10 a.m. to about 10 people. One of them was a writer for the CMJ. After the show, he and Valania started talking. Turned out, the writer knew someone starting a label and looking for new bands.
“Uh-huh” thought Valania, “Another case of 'I know somebody who knows somebody.'” But Valania thought 'what-the-hell' and gave the guy a tape to pass along and promptly forgot about the exchange.
The band fell apart shortly after the gig, due to lack of interest from both within the band and from the world at large. Valania had returned to writing about amusement parks and bowling alleys for assorted trade journals. Danzer picked up some work as a freelancer cameraman. Bassist P.R. Behler returned to unemployment and Knerr returned to social work. For all intents and purposes, the Psyclone Rangers were but the glory day tales of four responsible young adults slipping into middle age.
Dave Allen wasn't informed of this fact, however, when he called Valania. Allen was impressed with the tape and wanted to see the band play. When he showed up in Allentown, the foursome got him good and drunk and then played a rocking showcase at the Four G's.
Allentown agreed to sign them and soon sent airplane tickets and hired a producer, Dave Ogilvie. That was impressive, Valania remembered. He called Ogilvie the “Phil Spector of Grunge.” At the time, Ogilvie was being courted by Motley Crue, but Ogilvie too was intrigued by the Rangers and told the motley crew to wait.
Still, the band was skeptical. On the plane ride out, the Rangers talked about how the deal could fall through at anytime. On the first day there, though, when they ran into members of Sonic Youth at a coffee shop, they knew they were in the big-time.
All they had to do was make an album. The band moved into the studio, a big old building that was an anchor factory in the 19th century. Allen and Ogilvie set up residence in the Phoenix, a pink-colored hotel with a spacious courtyard. The band became so smitten with the place (or got tired of sleeping in an anchor factory) that they started crashing in Dave and Dave's rooms.
Not that they had much time to sleep. For three days, they did nothing but drink beer and record. Mostly they did their own material, but also covered Gun Club's “For the Sake of Ivy,” Dream Syndicate's “Halloween,” and the Modern Lovers' “I'm Straight.”
When they were done, they picked the best 12 songs and made the album, Feel Nice. In 1995 they release the follow up titled The Devil May Care, and then in 1996 the E.P Beatin' On The Bat Pole. I have to admit after that I'm not sure what happened to them. (Updated 5/5/12)
.
REFERENCES - Joab Jackson article http://www.joabj.com/Music/9310PsycloneRangers.html
.
SYMPATHY FOR THE RECORD INDUSTRY 1993
.
1. I WANNA BE JACK KENNEDY
2. HONEY CUMS HOME
3. BAD SEEDS
.
***DOWNLOAD***
Posted by Frank Miller

I went to college with these guys. I remember seeing them play a show in the cafeteria one weekend. I loved the song "I wanna be like Jack Kennedy".

I always thought they had a real unique sound. Thanks for the comment.

I can send you a better image of the sleeve. Reach me at koopstrongerthandirt@yahoo.com. Scott

Hey it's Scot the guitar player & REAL talent behind this two-bit act.

What the hell is going on here anyway?

But seriously, thanks for giving a shit. I have more. Lots more.

Hi Scot, What are you and the rest of the Rangers up to these days?

Thanks for reupping this rare ep. Sure would like to know what these guys are up to these days. Awesome live show!

Your welcome, I'm not sure what their doing now. As you can see I asked in the comments; but got no reply. Thanks for the comment.

can you, plese, re-up this EP?

I will be grateful.