The Locals (You Never Have Fun Single) 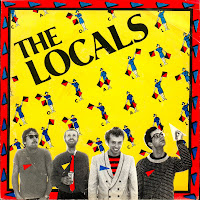 Exceptional Powerpop record from NYC'S, The Locals. They were around from 1979 through the early 80's, and this was their only single. It was originally posted a while back by the great Sing Sing Records Blog . They reissued it as well on their record label, I highly recommend you pick one up HERE! I've purchased many of their releases, and compared them to my original copies. I can't hardly tell the difference, they do a great job. I thought this would be a good time to post this single because The Locals have reunited and recently played at Kenny's Castaways Club, as part of the International PopOverthrow Festival. If you happened to get out to the show I'd like to know how it went???
.
Griffy Records 1980
.
1. You Never Have Fun
2. Yes Or No
.
***DOWNLOAD***
Posted by Frank Miller

"You never have fun" is a fantastic song. Thank you very much. I've liked this single a lot.

Thank youuuuuuuuuu. I love this!!!

Thanks for the comments, Glad you like the record.