The Freshmen (You've Never Heard Anything Like It Single) 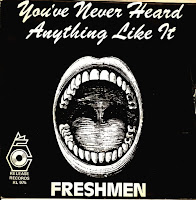 The Freshmen were a very successful Show Band, that formed in Northern Ireland in 1962.Early on they performed mostly covers, but eventually started to write their own material, and ended up releasing at least 20 or so singles, (of which nine were top 20 hits in Ireland), and three LP's, between 1964 and 1979. They also supported The Beach Boys on their 1967 Irish tour. I think this was their last real release before calling it quits around 1980. I guess you could call this somewhat of a Punk parody,but I think it's a fun record, and enjoy it just the same. It was named 'single of the week' by the NME, and reached number 17 in the Irish charts. If you would like to know more about the Freshmen, check out The Billy Brown Room.
.
Release Records 1979
.
1. You've Never Heard Anything Like It
2. Bombing Run
.
***DOWNLOAD***
Posted by Frank Miller

That A-side is so amazing, it's like The Monks (UK), parody that works sorta like the real thing.

Thank you very much!!!

Thanks for all of your comments,Jeffen, I always thought the Albertos song fuck you was kind of a parody as well, and it's one of my favorite punk records. Bummer Bitch was another one, if it's good, it's good.