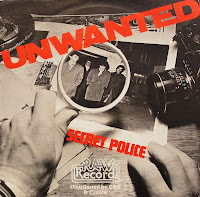 The Unwanted formed in London in 1977. This was their second of two singles released on Raw Records. I'm pretty sure my copy of the first single is a 12".A third single was slated titled Memory Man/Guns Of Love, but I'm not sure if it was ever released?? Lineup changes, ect. ect. lead to the Unwanted's end late in 1978. HERE'S a cool page from Punk77 with quite a bit of info on the band.
.
Raw Records 1978
.
1. Secret Police
2. These Boots Were Made For Walking
.
***DOWNLOAD***