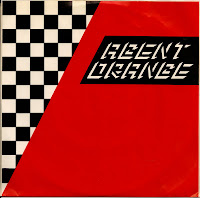 This is the third appearance here for Agent Orange, you might say that I like them. you can check out my previous post's HERE, and HERE. I'm not going into much detail, so if your interested in learning more about the band, they're pretty good places to start. Agent Orange formed in Orange County California in 1979. Shortly after which they self released this classic. This record is so good it had a series named after it. I guess it fetches a pretty good penny these days.
.
Self Released 1979
.
1. Bloodstains
2. America
3. Bored Of You
.
***DOWNLOAD***
Posted by Frank Miller

fuckin' awesome...great band, great stuff, totally cool...
one of my favourite US bands..

Fantastic. Thank you very much for all and thankx for share this.

Great single. You should hear their brand new single. Much like When You Least Expect It etc...
Ken

Thanks for all of your comments.I didn't know they had a new record?? I'll have to look for it,thanks for the heads up.

I got it on iTunes..It is called This House Is Haunted w/ Whistling Past The Graveyard.

Real nice stuff...reminds me of When You Least Expect It or This Is The Voice..been playing the hell out of it at home!
Ken