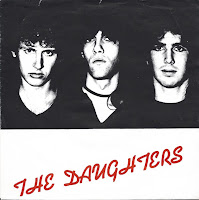 Per request, New Rips and Scans; originally posted 11/10/11.
The Daughters were a short lived three piece from Boston, who formed in the early eighties. They sporadically, opened for, and backed former New York Dolls guitarist Johnny Thunders. Joe Mazzari, has a website that’s defiantly worth checking out. I believe this single was their only release. There were a series of recording sessions for an LP, but it remains unreleased.

any chance of a reup of
The
Daughter's :German Girl?

Love the Blog. tune in, turn on, and Psyche Out. Mike Psyche

Enjoy Mike, thanks for the request and the comment.

Thanks for the info!