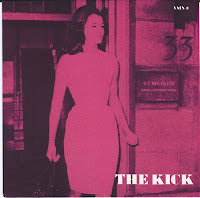 Per request, new rips and scans; originally posted 9/22/10.
The Kick were a London area four piece that were around from 1982 till 1987. In all they released three singles and had a couple of compilation tracks. When I first posted this record I knew very little about the band. But thanks to people who were nice enough to comment such as Mr. Suave and Bruce from the awesome My Life's A Jigsaw Blog, I was able to pick up a few things. Since Bruce never re upped the file, I included their first single as a bonus. It was originally posted along with the third single Here and Here. I can't remember if it originally had it or not, but my can't let go single has a slight warp in the beginning of the record that causes some noise; I guess it's time to upgrade... 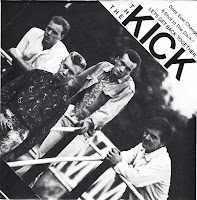 Thanks a lot for posting this record as I requested you not so many weeks ago...Frank

I´ve been looking for this one since ages..., and at last I´ve got it.

B-side of this single is a graet tune, I did´t Know that the A-side was a cover.

As far as I know this "mod revival" band from London Aerea has another single, and this two tracks are included on 54321...Countdown Compilation

Glad I could help, enjoy, Thanks for the info, and the request.

Yes, the Kick were included on the 54321! Countdown Compilation, and these two songs were part of the bonus tracks. The song that made the original comp was "Stuck On The Edge of A Blade", one of the best on the whole record IMO. Another Countdown Compilation (Smashing Time I think) included their song "Julie London"

A - lets get back together
B - don’t ever change/a shot in the dark - Footwear records (1984)which has 2 different sleeve variations (1: live band shot at the hope n anchor 2: band shot looking young & moody)

Thanks alot for the info!

Knew these tracks already, but had never heard of the ones mentioned by Bristolboy. Any chance of posting these?

I don't have it Pete, but if you pop over to My lifes a jigsaw and ask Bruce nicely he may post it for you if he has it.

Just thought I'd let you guys know that The Kick were from Chingford, started gigging around '82 and split around '87. Happy days....

Thank you for the info, much appreciated !

I have a live tape by these but the recording is very poor,good mid 80s mod band,they didn't last long which was a shame,I know Detour Records have tried to get a compilation together of their singles/demos etc,with no luck as yet!

I have a live tape by these,the recording is very poor,great mid 80s mod band,didn't stay around for long which was a shame,I know detour records have tried to get a compilation together of their singles,demos etc,with no luck as yet.

Your welcome Woody. Thanks for commenting!

Cheers frank
Really enjoy your blog have a great 2014 - ronnie

Thanks Ronnie, I'm glad you enjoy the blog and I hope you have a great 2014 as well!

Thanks for posting this, remembering a great band. Saw then many times. One thing, Richard Brimmacombe was Vocals and Guitar, not Ken. Richard taught me how to play guitar, really nice bloke.

Thanks for the comment, and the info Soundslab. I took the line Up from the back of their first single. Maybe vocal duties changed as they went along??